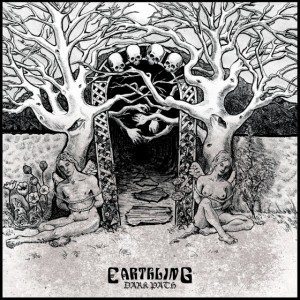 Out on May 7th through

Richmond, Virginia is a great town. Some of my favorite human beings reside there. Some of my favorite bands hail from there. The RVA scene runs the gamut; various musical styles, and even more influences coexist and commingle to form truly original acts. Earthling happen to be such an act. One who makes records that sound kind of special. Records like Dark Path, an ominous, thrash-filled celebration of all things crusty, black, and heavy. It reminds me of something I would've loved when I was 16; something I would've saved my lunch money in order to buy. A record I would've put in the CD player while sitting in the mall parking lot and blasted all the way home. Then again in the driveway. And again once inside.

It rules so hard that the last two tracks, 'Wilderness Throne' and 'Pass Into Beyond,' could be the entire record and I'd be happy. Think of the other four songs purely as bonus material. The varied content touches on most genres of metal, but is never predictable or in bad taste. The title track even has a Slayer-esque part near its end. Intentional or not, that is never a bad thing. The members of Earthling have an obvious love and respect for the music that has come before them. There are guitar solos. They are good. There are guitar harmonies. They're good, too. And riffs... so many amazing riffs. It took quite a while to capture all the good here; it was a five-year labor of love. Let's all be glad it exists.

The recording, by Garret Morris (Windhand, Cough, Parasytic) and mastering by Mikey Allred (Inter Arma, Hellbender, Across Tundras), is spot-on; energetic and in-your-face, with just enough character and atmosphere thrown in to keep it grounded. Release will be handled by local Richmond label, Forcefield Records.

Earthling is a rad band and Dark Path sounds like an honest record. No gimmicks, just a good chunk of metal from a very talented band.