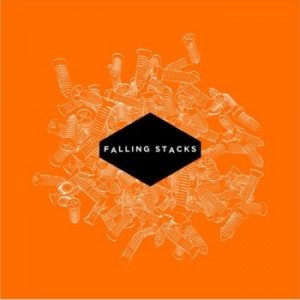 Meet  Falling Stacks,  a 3 piece Dogcore/Noise-rock group from Bristol. But wait, what in the name of all that is music is dogcore anyway? Apparently, it’s a fusion of hardcore punk, screamo and eurodance which also goes by the self-deprecating, name of “shitcore”. Sounds promising right?  In the case of Falling Stacks, judging by the 3-tracks from their second EP, EP2, “shitcore” might actually translate as “prettygoodcore”.

Opening track ‘White Wild Hare’ begins with a demented scream which is always a bonus in my books. Followed by aimless drum beats, a slightly freaky, creeping, off key guitar ,the lead singer spends a fair amount of time shouting through the  overwhelming cacophony about “a beautiful… building.” Perhaps one of which if  this track was ever to be played inside, would actually turn to rubble!

‘View Of A  Lake’ follows, with weird and whacky senseless lyrics but  “we eat biscuits for tea”… I would guess at ones including some form of nut,… because, quite frankly, these guys are nuts.

Sonically the themes of distortion and syncopation prevail throughout the EP but the closing track ‘Hospital’ is a monster of a song , highlighting these techniques to the point that at parts the lack of direction sounds a bit like these guys have thrown a million amped up instruments down the stairs at the same time to see which reaches the bottom first! Overall though, the EP is deliciously boisterous, disorderly, filthy, experimental avant-garde at its best.