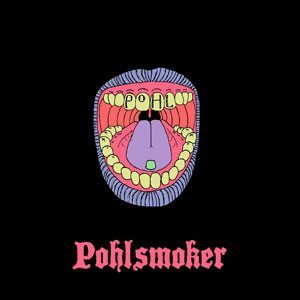 Digital release out now through here and CD through Future Noise. Cassette out May 8th through Tartarus Records

Yeah, you giggled a bit when you read the title of this record. No? Well, you rolled your eyes at least, right? No? Pohlsmoker. Still nothing? Well, I don't really want to hang out with you anymore. You're completely devoid of a sense of humor and might as well be walking around without a heart. For those of you who did happen to chuckle, let's go over here and talk for a moment.

Pohl is a guitar and drum duo hailing from Bristol, U.K. They have a sense of humor and play fuzzed-out, octave-based grunge, stoner, doom, alt-rock, and hardcore influenced noise rock. Sounds like a lot is happening on Pohlsmoker... and it's true, but the two (Will Pearce and Jamie Thompson) keep things tightly focused no matter what. The music is quite playful considering the extremely serious nature of the record, as evidenced in song titles such as 'Fuckboots,' 'Candyass,' and 'Forward The Joke.' Vocals range from quite clean and melodic to a crackling indie yelp. A perfect fit for the spazzed-out, off-kilter music.

Pohl are masters of their respective instruments. No joke. Every song on the Pohlsmoker EP is infectious. Or catchy. Or some other hip buzzword used to describe music as "instantly likable." The production is top-notch and sounds huge for a two-piece band. Latch Manghat at Rollin' Rex Studios deserves some credit for making Pohl's first studio effort one to remember. Fans of Big Business, Death From Above 1979, and Black Cobra will most likely dig this release. Pohlsmoker is available to buy on CD from Future Noise Records and on cassette from Tartarus Records.

Do just what they insist you do on their Facebook page: "Follow the world's least photogenic band on their meteoric rise to obscurity."

Later. And thanks for your time, funny person.