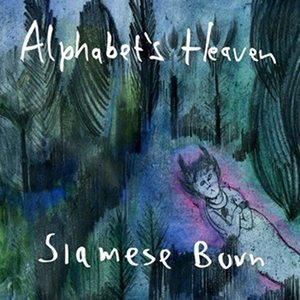 Out now at King Deluxe.

After the hugely impressive debut album Jay's Odyssey by Brighton-based producer Alphabets Heaven, he's been a busy boy, releasing his Rosewater cassettes and Boosh EP over the last two years. Imagine my excitement when he presented me with his latest EP Siamese Burn.

As usual with the psychedelic producer, his command of sumptuous sounds is stronger than ever, as he harnesses the full gamete of tones and samples available. It's hard to define exactly what kind of music he makes, as it soars between the very ambient to vibrant pulsating beats. His attention to detail is second to none, with each bleep produced individually to great effect, panning between right and left, each with its own unique quirk, yet unmistakably chained together by the steady flow created within each tune.

'Birthday' is an unusually sparse tune for Alphabets Heaven at first, yet it somehow persists in making your eyes dart around on reflex as the tune pans all over the place and each tone is individually placed forward or back in the mix. All of the sounds end up dancing around your head and you're left with the sensation of floating amidst a sea of lavish noises, individually meaningless but cobbling together some sort of melody between them.

'Fornia' contains more of the beats fans may be familiar with, as well as being a tune rich with extravagant samples, blended together perfectly.

All the tracks are stunningly produced. Having heard many unnecessary remixes over the years, I was still not at all surprised that the Julien Mier remix of title-track 'Siamese Burn' at the end is simply beautiful. Why would Alphabets Heaven pick anything but the best to round off his EP?

Here is a man who will seemingly spend every free second over months on an album before he deems it vaguely worthy to be released. Clearly a perfectionist, he manages to sail between the plains of soothing lulls and vivid curiousity, which arouses a gentle excitement. The euphoric calm triggered by Alphabets Heaven is akin only to the sensation I feel when listening to Bonobo's Days To Come. Make this EP a treasured part of your electronic music collection.