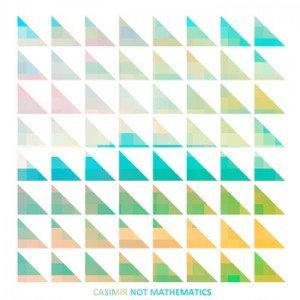 Not Mathematics is the debut EP from Bristol four-piece Casimir, who on their Facebook page uniquely describe their sound as, “music for giants”. Whether or not this is just a successful attempt at debuting their talent for wit as well as musicians, or an effort at avoiding the sometimes painstaking cliché of having to pigeon-hole themselves into a genre I don’t know - but I do feel this 5-track EP does cater for man and giant alike.

Opening track ‘Balancing Act’ begins with slightly unsettling, ringing, reverby, guitar loops which then blows up into big anthemic vocals, attacking drum beats that are supportive of the statement lead singer Mark Juggins … is trying to get across as he takes on an in your face war like cry of, “No I can’t be done, I’ve only just begun.” Not a song for the defeatist.

‘Lucid’ follows, with an electro/ spacey intro, with softer and almost sparkling guitars,  classic British Indie Rock wailing versus’ (the English version of Idlewild) springs to mind that then  heats up for a clattery, super screamy, chorus.

But without a doubt ‘Like Whistles’ is the strongest and most refreshing of the EP. The use of guitar in the first 6 seconds of the intro are reminiscent of lostprophets ‘last train home’ and continues with a similar haunting, imploring sadness but is more experimental rock than post hardcore with the most epic of instrumentals mid-song.

What else can I say from a band whose bio reads, “Post-olympics jaw dropping heart wrenchers.”. They’re here, they’re queer (in the older sense, pre-insult) they’re Casimir!