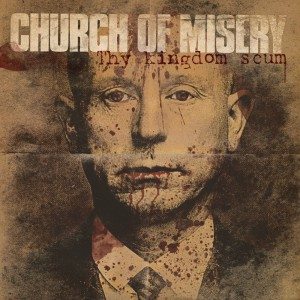 Enter the Church of Misery and take a seat. Close your eyes and let Thy Kingdom Scum fuel your psyche. The introduction song to the album, ‘B.T.K. (Dennis Rader)’ creates an image within the mind of lying on the hood of fire red ‘66 Mustang parked in the middle of a scorching desert in the peak of summer. As it plays on, the mood of the album is felt immediately. A whole body experience takes over, like remembering the feelings evoked on a good trip. Did I say trip? I meant roadddddddd trip. The sound waves of the album crash just as the cymbals do, making the hair on the neck stand up, injecting the noise in the blood.

A certain leafy green herb might enhance the way this album “hits”, so to speak. As ‘Lambs to the Slaughter (Ian Brady/Myra Hindley)’ takes off, the desert imagery continues. Now cruising on the highway somewhere between Arizona and Nevada, reminiscent of a scene from Fear and Loathing in Las Vegas. With guitars so groovy and bass so heavy, it’s hard not to feel the music coursing through the body with heat and intensity. The album gets better and better as each track is played, like a "Choose Your Own Adventure" book for the conscious mind.

The serial killer themes that are consistent throughout Church of Misery’s discography also add something to the mood, tone, and sound of the band. Each song covers a different serial killer and a different case. As the music floods the ears, the lyrical themes almost create a slideshow of murder, necrophilia, torture, and chaos initiated by those convicted. Almost as if this album (and their others) could be a soundtrack for the live news reports of the guilty being apprehended, capturing a touchstone of insanity.

During ‘Cranley Gardens (Dennis Andrew Nilsen) the audio clips mixed with the groovy sound of the bass almost take you back to the late 70’s, early 80’s (to the time when the murders took place). You can see investigators working on the case in a police station full of smoke, light shining through dirty windows. You can see Nilsen himself, sitting in a jail cell guilty yet unremorseful. As the howl of Hideki Fukasawa’s vocals tells his story, you can hear the cries of his victims almost like echoes against prison walls. You can see Nilsen replaying the murders like a movie in his mind, re-flushing the remains of those he killed down the lavatory all over again.

Perfect for fans of Black Sabbath, Sleep, Boris, Trouble, and Saint Vitus, Thy Kingdom Scum is an all-consuming album. This is definitely one that you want to crank up the volume for. Not for the faint of heart, each song is sure to evoke something inside. It’ll wake you up. Now if you don’t mind…I think I’ll take this album to the road and let it swallow me up. Who knows? The ghost of Peter Kurten might come and sit shotgun while his song ‘Dusseldorf Monster’ plays along.