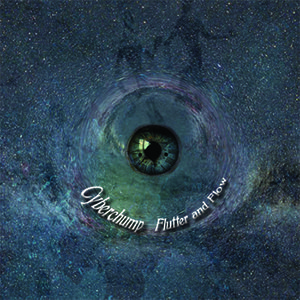 When we slow sound down, what happens?

Well, we know it lowers the pitch of the sound, we also know that it dulls the tone and timbre, as it's operating in a totally different frequency range than originally. This often imbues music with a totally different quality than previously: bright and upbeat music becomes prosaic, melancholy and otherworldly.

This was an area explored by composers who used tape-manipulation and, later, samplers to exploit the changes which time and pitch exerts on sound.

Rather than make this technique the whole of their music, Cyberchump have utilised bespoke software to re-pitch and stretch their own tracks from the past, to create backings for new compositions.

Just so you know, Cyberchump are Mark G. Eberhage and Jim Skeel. They work apart, only meeting up to mix and finalise their music. On their website, I count 10 previous releases, not including Flutter & Flow. So, quite prolific, then. They're experimental, conceptual and, as it turns out, compulsively listenable.

Ok, so what about the music? Well, several boxes are ticked. This is a duo whose influences aren't necessarily apparent, but I'd guess they're pretty eclectic and esoteric. There are touches of Another Green World-era Eno in places on 'Sign By Night', but this is fairly fleeting as deep Cooder-esque blues guitar and mellow mid-pitch bass punctuate the emerging soundscape. This is 'ambient', but not in a new-agey, self-indulgent and inwardly reflective way. It is ambient in that it's relatively sedate music which conjures some mildly dark and cinematic imagery. Picture music, in fact.

Later, in 'Neon', we get treated to some odd little timbres and dissonance. Dark and gradually escalating space-rock that broods and flows (and occasionally flutters).

There is a danger that the music becomes unfocused and lacking in structure with this type of project however, it is eminently melodic also. Little tuneful sequences and riffs pop in and out of the noise, tying the tracks together. In possibly the darkest and seemingly most formless track on the album, 'Dark Machine Language', a beatless drone and machine noises bring to mind sci-fi scenarios, as well as Martin Hannett's 'Lift Recordings' for Joy Division's Unknown Pleasures sessions.

The album concludes with the euphoric pads of 'When Time Was No Time', made more foreboding-sounding by an eastern bass melody and slowly opening filters. It develops into an awesome swathe of chiming guitar and deep drone.

A simple conclusion for you, dear reader: How to summarise this album? Dark, melodic, contemplative, cinematic, experimental, headphone-filling. Therefore, it pushes all my buttons.