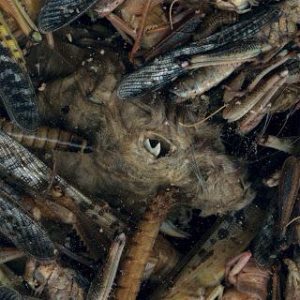 1. Ingredients: Dark Throne, Converge, a wolf, a chainsaw, some surgical thread, a bunch of plastic sheeting, guitars, bass, drums, and a microphone.

2. Place all “supplies” in the back of a rusted out Econoline touring van. Any van will do, as long as it is rusty.

3. Find a nice, quiet place to do some “work.” Maybe a secluded cabin in the woods or a nice warehouse.

4. Prep the area and start cutting, being especially careful not to lose any piece of said bands or wolf. This could change everything. Make a tidy pile in the corner of the room.

5. Though the pile looks intimidating, start selecting various bits and begin sewing. That surgical thread will come in very handy at this point.

6. Once all the parts are stitched together, the monstrous beast that has been assembled should look (and sound) somewhat like Belgium's Hessian. Their debut full-length, Manégarmr, is a masterwork of blackened-hardcore debaucheries.

Manégarmr, the word, is an anglicized name for a wolf, or "Moon-Hound," in Norse mythology. This gigantic beast tirelessly chases the moon across the night sky. Ultimately, the wolf catches and swallows the moon in order to bring on the morning light.

Manégarmr, the record, plays like the soundtrack to this nightly hunt. It is intense from start to finish. There are brief moments when the moon is allowed to catch its breath, then it is right back to the gruesome hunt. Angular guitars swoop in and seem to come from every direction. Speed and dexterity play a major role as well. Things move fast and the vocals are fierce (and reminiscent of Dwid from hardcore legionnaires Integrity). It is an angry record; about as aggressive as it gets. This is a good thing. Cathartic and almost perfect in its execution, Manégarmr will no doubt catch many peoples' attention in 2013; fans and critics alike. It is already marked as a best-of on many lists (this guy included).

It doesn't get much better than Hessian. This monstrous, blackened-hardcore/grind spewing beast of a wolf is on the prowl. The moon better watch its back.