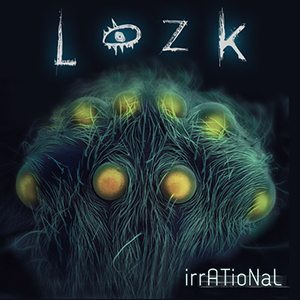 Out now at Zube Records

Lozk is a Colombian artist that blends influences from diverse genres: experimental, electronica, industrial, big beat, ambient, and drum n' bass into a delicious musical stew. The sound is dynamic, edgy, adventurous, electronic and deeply layered. Lozk samples the world around him for his music which includes ordinary and quotidian objects, sounds from the street, animals, and musical instruments. The amassed sounds are woven into catchy, well structured tracks.

Lozk's ten song album is entitled Irrational. I was impressed from start to finish by Lozk's irrational journey. At the core of most of his tracks are mutilated synth, straining keyboards and dissonant sounds. It makes sense that this album starts and finishes with a track featuring piano. That is piano if it was scored for a  Tim Burton film. The intro track, an instant favourite of mine, 'Twilight Run' blends a beautiful and haunting piano melody with a brilliant electronic vibe that constantly fades in and out of focus. Various eerie electronic constructs float up and down within the many layers of this impressive track.  The song has a dark, industrial-ish feel with some smacking percussion (holy snare!) and creepy digital sounds. An absolutely delicious track. The layered voyage into Lozk's shadowy musical world continues with the frantic whirling melody of 'Kowka's Guts' which sounds like it could derail at any moment.

Another standout track is 'Requiem Machina'. First, a little interesting background on the track from Lozk's website. The tracks' eerie female vocals are based on meaningless and randomly selected syllables which are apparently Dadaist inspired. Inspired? You bet. The track is incredibly trippy. It evokes thoughts of some sort of strange pagan ritual. I'm sure if you played it backward something would appear. Please do not try this at home. 'Requiem Machina' pushes a frenzied and hypnotic beat with a trance inducing pace and a constant bombardment of vocal sounds.

The next two tracks 'Subterranea' and 'Aquarium' seem to blend together with 'Subterranea' acting as a strange intro for 'Aquarium'. 'Aquarium' features slow but striking acoustic guitar mixed with dark atmospheric punctuations that add apprehension and keep this track sufficiently weird. By mid-track, 'Aquarium' introduces some beefy percussion as it dives into Lozk's murky pool of samples.

Captivating dark ambient/industrial vibes and imposing percussion surface again for 'Time Hoist' and 'Echolalia'. 'Time Hoist' is a staggering tromp fused with more of Lozk's dark mutated samples and sci-fi influenced sounds. 'Echolalia' sounds like a berserk electronic beast crashing through Tokyo. Echolalia! The track is random and absorbing like much of Skinny Puppy's material with intense sounds cascading with fury, seemingly from everywhere.

Irrational started with piano and it ends with piano. Lozk brings Debussy's somber and slow 'Des Pas Sur La Neige' into the 21st century. The gentle rolling piano melody of 'Des Pas Sur La Neige' is juxtaposed with the atmospheric whizzing of electronics and cosmic samples. It is a curious combination that I didn't find initially appealing. I expect it will grow on me however. All the other tracks on Irrational certainly have.

Irrational is a stupefying accomplishment of digital sound engineering. Lozk's unique percussion sounds and inspiring sample manipulation are some of the best, most engaging and original I've ever heard. Period. The zealously and lush soundscapes he creates are imaginative, gripping and possess the spellbinding quality of a visionary musical journey. Lozk's creative vision is matched by his technical ability with guitar, piano and voice. It would be wholly irrational for fans of gritty dark electronica to miss out on Irrational.