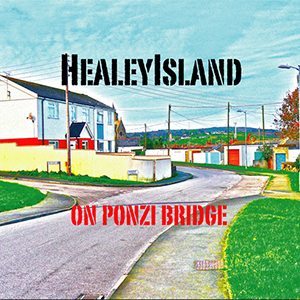 "Easy listening" and muzak is all around us, isn’t it? We often listen to music as a means of switching-off the world, of blanking out distraction. But music used in malls, supermarkets and hotels is designed to manipulate us, to placate us. As a means of control, it’s fairly innocuous and taken for granted…because it’s been around for decades. Muzak is often cited as shorthand for corporate insincerity and a passive form of mind-control. This shorthand has been used by musicians ever since Eno came up with the notion of "ambient music". Before this, The BBC Radiophonic Workshop developed a form of experimental and reactionary muzak with their bizarre little radio and TV themes, often offending more conservative listeners.

Greg Healey has been making electronic music as HealeyIsland for around 15 years and it's into the above territory which he travels with his latest offering. The album On Ponzi Bridge doesn’t pander to fashion and it contains a depth and imagination in its production and lyricism. Healey’s lyrics tend towards the impressionistic and non-linear, but taken in context of the album, they start to develop a bittersweet narrative; not as in songs about love or hate, but of politics, capitalism, image and media. That these lyrics are not polemic, but contain subtle and occasionally surreal juxtapositions and ironies, is a testament to Healey’s fine instinct for wordplay; all delivered in a vocal style that falls somewhere between that of Vini Reilly’s fragile, intimate and understated tenor and that of a nightclub crooner. I know that sounds like a highly unusual mix, but it works very well. The titles of the songs often give an indication of their lyrical content, such as with 'Entertainment' and 'Ayn Rand Is My Mistress'.

And so to the music itself. Healey has refined a difficult-to-achieve balance between tunefulness and experimentation over the years and, with On Ponzi Bridge, we find him taking this approach to a logical conclusion. On the opening track, ‘The End Of History’, the introduction sounds like the sort of lulling muzak that accompanies the start of a Wii game for instance and the production isn’t jarring for the listener. It lulls you in and then, coupled with the lyrics, starts to unsettle. There is a strong sense that Healey has aimed at an ironic use of muzak as a weapon. The album is quite dark in mood, though not overtly aggressive. At the risk of drawing comparisons, there are elements of Lemon Jelly’s use of easy listening to evoke a time and relay a message. Though, as On Ponzi Bridge progresses, it gets inherently darker and the sound slightly more harsh. There are rich synth layers, lush orchestral strings, the occasional electronic squiggle and laid-back beats. The music production is luxurious, one feels, in order to reinforce the overlying themes of politics, economics and commerce which are suggested by the easy-listening influences and the lyrics.

In conclusion, it’s easy to get carried away with hypothesizing and reading too much into the album; but the truth is that, musically, the album stands on its own two feet as a damn good listen. This is a very individual release from an interesting and adept artist.