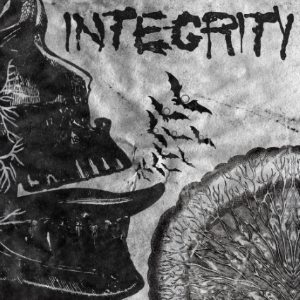 Out now through A389 Records (LP) and Magic Bullet Records (CD)

Integrity have been making an angry noise for a long time. Formed in Cleveland, Ohio in 1988, the band released a couple of EPs before issuing its first full-length, Those Who Fear Tomorrow, in 1991. With it, they unleashed an unholy blend of hardcore and metal that has been extremely influential on countless bands since. In fact, they are probably one of the first "metalcore" bands to hit the scene. (Rampant "labeling" of genres and sub-genres started around this time as well).

Suicide Black Snake is the band's ninth studio album, and it is classic Integrity. Though the band has gone through numerous line-up changes, one constant for the past 22 years has been vocalist, and founding member, Dwid. Let's face it, he is Integrity at this point in the game. His vocal style stands out as original and is one of the strongest in all of metal or hardcore. His voice is immediately identifiable, as are most of the songs he writes. The songs on Suicide Black Snake are no exception. There's a rawness present on every track; an edgy urgency. One thing does stand out on the record: the use of harmonica on the (mostly) spoken-word 'There Ain't No Living in Life'. Oddly enough it fits rather well. Another standout is the extremely classic-sounding solo in '+Orrchida'. It is great. Melodic. Very NWOBHM inspired. The rest is fast, angry, and short. Classic Integrity.

Loyal fans should have no problem getting into Suicide Black Snake. First-time listeners, however, might want to venture back into their catalog a bit, preferably before Integrity 2000. Dwid knows what he wants to do, and he does it. And why not? It has worked so far. He must be doing something right. Pick up Suicide Black Snake and judge for yourself.