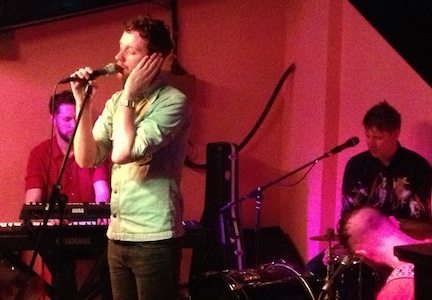 Autoheart are releasing their debut album Punch on the 15 of July, so last night, at a small bar in North London, they played an acoustic set by way of a taster of what’s the come. I’m lucky enough to have heard the album through reviewing it for this very website, but I’ll try not to be the kind of person who uses his blagging skills for ill...

First up we had a singer/songwriter type who introduced herself simply as Sabrina. As far as I could tell she wasn’t a teenage witch, BUT SHE CERTAINLY WAS BEWITCHING. Or something. Sabrina was a breathy chanteuse, the likes of which John Lewis’ advertising department have on speed dial come their inevitable christmas campaign. She was perfectly enjoyable to begin with, but soon became rather samey, so I checked Twitter. Twitter was going on about a programme called First Date, which I obviously wasn’t watching, so turned it off. Sabrina’s final track rocked like a bastard though, which was nice. It was a bit Bonnie Raitt/KT Tunstall. Then she left the stage. She had excellent shoes. If you’re reading this, Sabrina, I’m sorry for thinking you were a bit samey, but my girlfriend loved your shoes.

Then we had Five Minute Pop Promo. I know this was their name, because they told us whenever they could. It was clear that they knew most of the audience, so this was a part of their banter. I rather liked these lads. They played guitars with gusto, while sitting down with pints of beer to hand, singing in harmony and stuff. At first I thought they sounded like Gomez, but folksier, then I realised that they were basically The Folksmen from the excellent Christopher Guest film, A Mighty Wind. If you’ve not seen A Mighty Wind then you need to try harder to watch good films. Anyway FMPP told us that they’ll be on 6 Music at 2am on Monday, if you’re interested.

And so Autoheart came to the stage, and I had to stand up because the room was heaving. It’s no secret that I love these guys, and have done for the past four years since I first heard ‘Sailor Song’, but I’ve not yet managed to see them live. Given that it was to be an acoustic set rather than a full electric one, I didn’t know what to expect, but was utterly blown away. Autoheart are a band who know what they’re doing. They’re damn fine musicians who know their music inside out. They played the five singles they’ve already released from the album that has yet to be released, then they played a handful of album tracks, and a new one that has left me excited for what they’ve got lined up.

The most astonishing part of the evening was witnessing Jody’s voice firsthand. Listening to the album, you’re not 100% certain that there isn’t a bit of production work going on, seeing them live there’s no doubt that it’s all real. And it’s all effortless. Just incredible.

The only real complaint I have of the evening is the amount of people who talked through the WHOLE FUCKING THING. But that’s hardly the fault of the band, and a subject for another rant. I’d have been entirely justified in murdering every one of the offenders in increasingly macabre ways though.