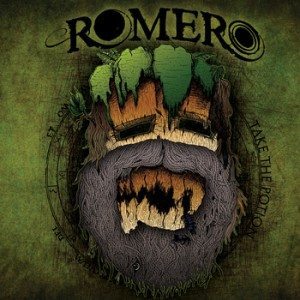 Romero are a three piece classic / modern heavy rock band from Madison that formed in late 2009. The band consists of  Jeffrey Mundt on vocals & guitar, Steve Stanczyk on bass and Ben Brooks on drums & vocals. They have shared the stage with some impressive bands like Clutch, Dead Meadow and Black Label Society. Their new debut album Take The Potion is a fast and furious album with some Doom Sludge and a vocal mix of harmonie and grittiness. This should appeal to most fans of Tool, Kyuss and Sleep, where the heavy guitar riffs are more High on Fire and Black Sabbath. This gives you a solid album with seven well crafted pounding tracks. Although all the track are good in their own right, I have picked out four that I feel stand out the most.

After the fast opening track of 'Compliments & Cocktails' you are brought down to the nice slow easy on the ear tempo of 'Couch Lock' for about 1.40, then the guitar blasts in and it's not long until you are thrown into the apex of the song. Great vocals on this track but sometimes it's the simple things in life that make you smile and that would be the last few seconds of this song. Great way to end a track I feel.

If your not hooked by now then listen to 'One Means Four'. Again this track starts slow with a very catchy guitar riff but soon breaks into a powerful song coming in at just over six minutes. There is a bit of everything in this song, classic heavy guitar with modern hardcore rock vocals. Could you ask for more? Well you could try 'Wheeling Deervish', touch of the Stoner feel to this track with the vocal mix of harmonious verses hardcore howling. Works well up to a point but a bit to Ian Brown at times. The track itself is great, which is why I picked it out. Last but no means least is 'In the Heather', the longest track on Take The Potion. This is the track that pulls everything together, no more Ian Brown, just good vocals from both camps, excellent guitar, drums & bass.

I enjoyed listening to this album and I think on a commercial basis it will do very well. These guys have produced a big sound for a three piece band, with a bit of help from Tim Consequence who plays the organ on tracks 'Compliments & Cocktails' and 'Wheeling Deervish'. Romero also have some very nice merch, which is well worth a look at. Head over to Bandcamp, there is a great t-shirt called "Witch Doctors" which is my favorite and any band that brings out their music on vinyl get's my vote.

Play it loud guys, 3 out of 5 headphones.