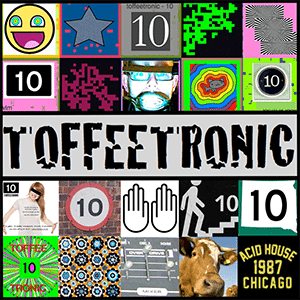 Toffeetronic is the brainchild of Matt Gunn with the occasional collaborator or two. He's been making music in this guise for ten years and has amassed a pretty hefty back-catalogue of bouncy, boisterous and tuneful dance music.

Dance music is an odd term. It's a bit like saying "rhythm music" or "sound music". The genre we call Dance Music is so broad and fragmented as to render the term totally redundant.

So, I will try to be more specific: Toffeetronic make music which is mainly electronic, which occasionally includes more 'traditional' rock instrumentation and some vocals, it sticks to a template of solid four-on-the-floor beats, involves repetitive riffs and sequences, it draws on a fairly wide range of influences: disco, 90s techno, Kraftwerk, early 80s electro, acid-house, hip-hop with the odd bit of musique concrete thrown in for good measure. It occupies the poppier, as in classic dance pop production and structure, end of the dance oeuvre. It is music created by an individual who has been marinated in electronic dance music history and mythology.

As I said, Toffeetronic has been in existence for 10 years and this new collection of tunes, 10, trawls TT's back-catalogue to offer a celebration of his output. Celebration is the key word: this is party music with brains; clear in its vision. That clarity stretches to the impressive production aesthetic which merges polish with experimentation; style with substance; smoothness with squelch.

This is as good a collection of solid electro and acid-infused dance tunes as you're likely to find, through its occasional twists and turns. It's been a productive 10 years for Toffeetronic and this is an ideal showcase for his impressive tunes.