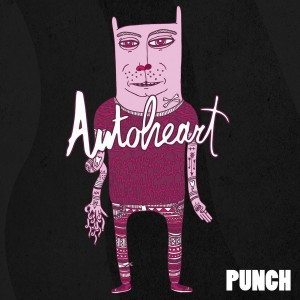 Four years ago, laid in bed listening to Shaun Keaveny on 6Music, not wanting to get up for my first lecture of the day, I was first introduced to The Gadsdens. The single was ‘The Sailor Song’, and I’d never heard anything like it before. Ever since that cold November morning I’ve waited for more from that band.

Sadly, The Gadsdens were never to release any more music.

Happily for me, it was because they renamed themselves Autoheart, and on the 15th of July, they will release Punch - their debut album. Four years in the making, and every bit as good as I could have hoped for.

Punch is a pop album. Not like One Direction do pop, not indie pop, but the purest kind. It is an ensemble piece, where Jody’s vocals, Simon’s piano, Barney’s guitar, and David’s drums share space, wrapping around each other to craft some of the catchiest, most beautiful music you’ll hear in a long while. Punch is an album about frailty and disappointment; if you’re planning on having your heart broken this year, this is the album you’ll want to have on standby.

Without wishing to downgrade what the other members of the band do, the standout element of Punch - besides those beautifully crafted hooks, of course - is Jody Gadsden’s haunting vocal. Sounding like a cross between Tracy Chapman and Anthony Hegarty, it’s astonishing how well he is able to transition between a strong, belting sound and a tender, delicate delivery.

While the album is stunningly consistent, it does have high points. The first of these is former single, ‘Control’. A staccato drum, a hypnotic piano loop, a lyric concerning the end of something and the regret that accompanies it. He’ll be ok though. People are always ok in the end. Right?

The aforementioned ‘Sailor Song’ is another high point. Possibly *the* high point. From a personal perspective, this is a song that I can return to over and over, without growing tired of it. Again, a hypnotic piano loop, but this time a far more purposeful beat. We’re more sure of ourselves this time, even though the subject matter is similar. But where ‘Control’ wrapped us in piano, the ‘Sailor Song’ surrounds us with synth, soothing our ears, matching Jody’s smokey, yet smooth vocal eerily well. A truly beautiful song, and one that Autoheart should be rightly proud of.

A special mention also to ‘Hungover In The City Of Dust’. If Antony and the Johnsons crafted a song with Sigur Ros, it would likely sound like this. A pretty song to begin with, it grows and swells through its 4:30 running time, exploding into something sublime, giving you what you want of it, before suddenly shrinking back, leaving you feeling satisfied, happy, ready for the next piece.

This is a difficult review to write, because Punch is such a sublime record. On the one hand I want to sell you a band who deserve every penny they make from selling their art. On the other, an overly sycophantic review could be off-putting, or could elevate the album to a level that couldn’t ever be achieved. Please take my word for it, give Punch fifty minutes of your life, then give it another fifty minutes, and I guarantee you’ll be as astonished as I am. Rarely have I ever been this blown away by an album I’ve spent this long waiting for.