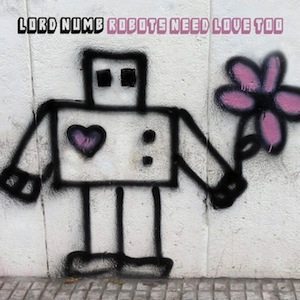 There's a compelling seam of retro-futurism running through the entirety of Lord Numb's album Robots Need Love Too. The spectres of Tristram Cary, David Cain and The Normal hang over this release, as there's an interweaving of dark aural atmospheres and sinister electropop at play. However, there's also an interesting interplay with more rock-like conventions which take these tracks into more accessible territory.

A majority of the tracks fall into the latter category, whilst the atmospheres and odd squiggles punctuate the more conventional elements of song structure.

'Moon Walk' is the most "radiophonic" of the tracks and, as the name would suggest, it evokes a time when the moon landing seemed to be the stuff of fiction. It wouldn't seem out of place on an episode of some rarely-seen 1960s BBC sci-fi drama. 'Luna Park' ups the rock-factor with driving rhythms and treated guitars as Lord Numb sings 'Lets go down to Lunar Park, let the ferris wheel light up the dark…in Lunar Park'. The image of Lunar Park being an antiquated space-theme park from the 50s. 'The Arabian Nightmare' exploits a post-punk vibe with it's metronomic bass and drums. 'The Dark Ages' questions our propensity to live in a technological age whilst we engage in near-mediaeval values. This is quirky electro-rock, with pounding drums and odd squiggles of electronica lying next to plaintiff vocals and surf-guitar balladry.

What Lord Numb has done with Robots Need Love Too is taken the conventions of the pop song from different genres and merged it with more left-field sonic elements. It, at times, has the feel of dance-rock from the early to mid-1990s; but it also has a more jaded view of a future that never came, never developed into the utopian world we imagined, as opposed to the 1990s equivalent of drug-consumption and hedonism. There's a bitter-sweet mood to the songs and a slight melancholic air which imbues the album with images of a man pining for a past when the future seemed so optimistic. Numb, he ain't.