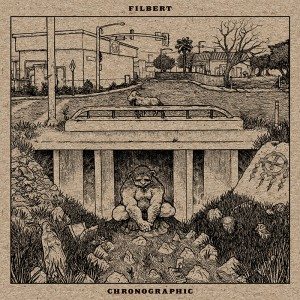 The album opens with ‘Breath’ where weary, uptight, cheerless vocals follow a simple yet sprightly guitar melody that’s supported with a great percussion section. Alternating, odd, animal sounding vocal interjections are also crop up here, conjuring ideas of how I imagine it would feel to be led on a Safari by a dismal tour guide, who is distractedly telling you about their everyday routine and what they had for breakfast, seemingly unaware of the chattering surroundings. ‘Headphones’ is all about the twinkly percussion, a repetitive guitar hook and monotonous, mumbling, interweaving, male and female vocals.

‘Between Seams’ has an urgent twang to it, the vocal performance almost seems quickly computerised and the strange backing vocal noises are befitting of lyrics such as “is it comforting or terrifying”. To be honest, I haven’t decided yet either. I felt a little bit like I was sitting in a late 60’s/70’s American type sitcom through parts of this song, especially when clips of children’s voices, are thrown into the mix.

'Sliced Bread’ continues the 60’s rock vibe to this track, and a great piano melody to look out for. ‘Collections’ buzzes like you’ve just awoken an angry hornet’s nest, but the high notes the lead singer hits here are pretty cool.

‘Race Cars and Chocolate’ puts emphasis on dull vocals with an eerie guitar riff and closing track ‘Geisha Gold’ has a very uplifting intro and is one of few times the vocal tone changes from chatty to actual singing that unwinds with such gusto they must have been saving it up through the entirety of the album. It also fades out with a small child singing and hammering at a piano so out of tune that you can’t help but smile. However, on first listen you leave the CD feeling slightly confused as to what you just listened to and it’s only after a numerous amount of plays you make sense of the mystery.

Sonically, the mish-mash feeling of “what’s happening? oh that’s new… did I really just hear that?” when listening to this album is very charming, and although the musical experimentation is unexpected it’s very much welcome.

Chronographic’s strength is in its refreshing, uncomplicated, lyricism that speaks out to whoever it may concern with the underrated simplicity of uncoloured honesty. We are as shrewdly aware of the flaws of the human condition and the humble journey the narrator is embarking on (albeit at times slightly begrudgingly) as the narrator is themselves. Perhaps the dreary vocals which support the lyrics emphasising in parts a mundane existence are relatable for us all on some level, but they never seem to cross the line into self-pitying remorse and despite being a very acquired taste – Chronographic is not an album Filbert should ever feel apologetic for.