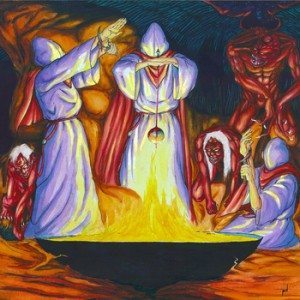 “Take Over And Destroy: An American rock & roll band from the 1970's trapped inside a Scandinavian metal band from the 1990's.” This is how TOAD. has chosen to describe themselves and they couldn’t be more dead on. Hailing from Tempe, AZ, this powerhouse has truly found the perfect fusion of evil melodies and primal reverberations with their upcoming release, Endless Night. Playing blackened metal that will leave you with an aftertaste of rock & roll, TOAD. composes their music with a unique style and undeniable ferociousness.

‘Taste of the Grave’ is the curtain opener of the album. The song begins with lyrics being screamed out, from the depths of hell and the pit of the throat. The atmosphere of the song is realized without delay. The force of the track is undeniable. The guitar tone adds a groove to the song while also maintaining an evil sound that sings. The added presence of the organ is redolent of a graveside service, acting as the icing to the song as a whole. ‘Taste of the Grave’ was a good choice as the opener for the album as it definitely posts up inside the listener.

The second track on the album ‘Cosmophobia’ (defined as the fear or dread of outer space) creates an ambiance of dread from the very beginning. You’ll feel the fear as the musicians show you what it sounds like. The song is dark, ominous, and drenched with consternation. About half way through the sound begins winding in a way that’s enthralling and numbing all at once. The song only gets better, picking up with a baleful energy that carries the song to its close.

The drumming and the sound of the bass in the beginning of ‘Howling House’ are almost reminiscent of a KISS song. (This is the point on the album where you experience the aftertaste of rock ‘n roll TOAD serves up). As the track begins to take form it takes on a howling presence. Creepy and mysterious, the guitar sounds lead the way as all of the instruments come together and join in a symphony of horror. Scenes from old B-movies fill the mind as the vocals, reminiscent of Darkthrone, echo in the mind and tell the rest of the story.

‘Boundaries of the Flesh’ seems to be the catchiest song on the album. It’s the track that stays most prevalently in the mind after listening to it. The opening of the tune bludgeons with a barrage of sound, an instrumental bedlam reminiscent of Venom. The composition of the song comes together almost effortlessly. About a minute into the track it turns just as evil as it is looming. ‘Boundaries of the Flesh’ as a whole is a real headbanger, you’ll be able to feel the heat rising from the instruments as the heaviness keeps you entertained. This song is sure to be a real crowd pleaser.

The album curtain closes with ‘Endless Night’, a song that starts off slow and steady, building and building as it reaches its peak. The notes almost float above the song, like an out of body experience for the ears. The guitars harmonize as the drums jam on.  The track paints a picture of dark blues and blacks, flashing pictures of driving on an old winding road on a foggy night. The feeling of being unprepared for impending doom that lies ahead wraps you up and doesn’t let go. A testament to the feel of the whole album, it prepares you for the end.

It must be noted how incredible the art is for this release. Sean R. Williams from Antimetalphysical is behind it, and it absolutely compliments the record – dark, ghostly, and shrouded in mystery. You can pick Endless Night up now.