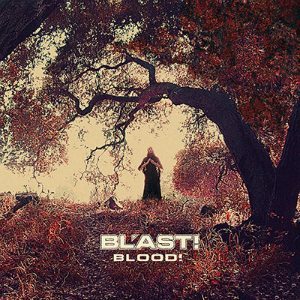 Some bands have the ability to take you to a certain time and place. Such is the case with Santa Cruz, California’s BL’AST!. From the first clang of bass notes on ‘Only Time Will Tell’, I was transported back to my skateboarding days. Learning new tricks. Getting yelled at by “the man". Slaloming down huge hills. Fucking speed wobbles. Injuries. Punk rock and hardcore. The good stuff. Times that stuck in your head like an ice pick. The kind of memories you want to hold onto forever. BL’AST! brings it all back with their new/old release, Blood. It is a classic, through and through. A new classic.

Blood is a record that almost never was. Recorded in the mid-80s and basically “lost”, it spent 25 years of its life having only been heard by a select few (mainly the band), collecting dust and bristling with potential. After being unearthed, the tapes were sent to none other than David Grohl, who had agreed to master the recordings for Southern Lord. After a bit of cleanup, and massive amounts of love, the album was ready for the rest of us. It could not sound any better. It is as if the band was playing a live show to tape. Like, yesterday.

BL’AST! had a style all their own. Though they come off a bit sloppy, everything was always under control. They could play their asses off. Songs like ‘Tomorrow’, ‘Poison’, and ‘Something Beyond’ sound as though they might fall into obliteration, but keep going, pushing energy and passion to a new level. Time signatures are all over the place. Squonky ‘leads’ fly by. And it all works. It makes sense.

Blood is not a record a bunch of old dudes reunited to record and release, it is the real deal from a bygone era. And it is basically perfection. It makes memories flood into my brain. Good ones. Now, a whole new generation have a soundtrack for their memories. New ones. They better make them great… the music is.