(((O))) : The Red Paintings – The Revolution Is Never Coming 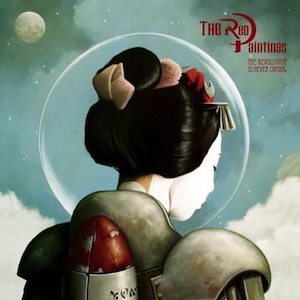 Out on September 30th through

74 minutes long, six years in the making at a cost of nearly $250,000, The Revolution is Never Coming by The Red Paintings is massive in almost every sense, making this an incredibly daunting review to write.

The Red Paintings aren’t a band, per se, more the artistic output of Trash McSweeney, a native of Geelong, Victoria who, after suffering a seizure in 2000, discovered that he had developed synesthesia - a condition whereby people can ‘see’ colours. The upshot is McSweeney abandoning paint in favour of sound as his preferred medium. Maybe that’s nothing more than a great little backstory, maybe it’s genuine, all I know is that the resultant album is genuinely one of the most ambitious recordings I have ever come across. The Revolution Is Never Coming is not a pop album, it is not a rock album, it is a masterpiece that contains elements of both of those, ranging across the board; reaching in to the depths of McSweeney’s psyche via the medium of a seemingly infinite number of musicians.

Revolution... was, for the most part, crowd funded. McSweeney has a fervent following who wanted to hear what he had to say. He appealed to them for funding, and he got it. The liner notes for the album thank the numerous fans who contributed and were allowed to take part in the atmosphere by playing along with the orchestra. They weren’t recorded, but that’s hardly the point; this is music for the sake of the fans.

The album opens with ‘Vampires Are Chasing Me’, a warm, comfortable introduction of sorts. A gentle vocal over what is almost a lullaby, McSweeney telling us that “Vampires are chasing me to another world”. It’s haunting and beautiful, bolstered by lush strings and angelic choral backing vocals. A spoken word piece emerges from the sound; an extract taken from Spielberg’s A.I. Is McSweeney telling us that he has become a robot; an automaton moving from day to day, never changing, repeating the same mistakes? Is it a message for us all? As with much of Revolution... - with art as a whole - the message is yours to make. Trash gives us the notes, it is up to us to put them in the right order according to where our lives are. The gentle calm that floats over you during 'Vampires Are Chasing Me' is utterly destroyed, however, by the wall of sound that signals ‘Dead Children’. Dead children *should* be jarring though, should they not?

From a style perspective, Revolution... is akin to Tool at their most cerebral. There are compound time signatures, chugging, aggressive guitars and ambitious vocals. McSweeney may not have the range of Maynard James Keenan - very few do - but he has the passion, and a similar, ethereal quality. In terms of the scope of the album, it bears more than a passing similarity to Pink Floyd’s The Wall; it wouldn’t be too much of a stretch to see this turned into a feature length film.

A particular high point on the album is found in the title track, ‘The Revolution Is Never Coming’. Lush strings - and they really are strings, not the orchestra setting on a keyboard - juxtapose with rumbling bass lines and heavy beats. Lyrically it fits in perfectly with how we’re all feeling right now; the world is falling apart, multinational corporations are running roughshod over us all, governments are acting in the best interests of themselves and their friends, while the common people are left to pick over what’s left. The revolution is literally never coming. We sit back and let it happen. The revolution is never coming.

The Revolution Is Never Coming is a breathtaking labour of love, a piece of art that deserves recognition beyond The Red Paintings’ enthusiastic fanbase.