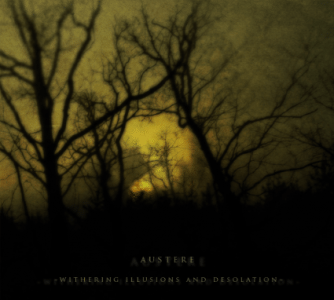 Out on October 29th through

Of all the music genres I listen to, there is something about the world of depressive black metal that fascinates me like no other. But to try and explain why is a different story altogether. On some level, I suppose, you could compare it to watching horror films or staring out the car window at the scene of a horrific accident – a combination of morbid curiosity and wanting to scare yourself shitless – but there is something about listening to the sound of pure mental and (supposedly) physical torture that goes far beyond what one endures with these comparatively lightweight experiences.

Austere are among the top-tier of truly depressive black metal bands, which will force you to re-evaluate your ideas about pain and suffering. Like many of the more successful bands in the genre, Austere find the right balance of cold detachment and sorrowful melodies in Withering Illusions and Desolation. Sonically, the album doesn’t stray too far from atmospheric Burzum-worship, except for the welcome addition of modern blackgaze elements that would be explored further in their next album, To Lay Like Old Ashes. The melodies allow for less strenuous listening and create a wonderfully sorrowful atmosphere that seems much more genuinely emotional than the harsh nihilism of some of the genre’s other exponents.

The obvious talking point of this release is, of course, the vocals. Sorrow and Desolate share vocal duties but both of them utilise very similar inhumane squeals and shrieks. These are the sounds you would make if you were being horribly tortured or dying a slow and painful death. As you might expect, this particularly high-pitched wailing is not all that pleasant but it is very effective. Listening to the album in complete isolation, it is hard to argue that this is the sound of real pain and real detachment, and to this end the vocals do what is required of them.

As this is a re-release it should be noted that, having never heard the original, it is impossible for me to say whether it is an improvement or not. However, considering black metal’s lo-fi approach, this is about as good as it gets when it comes to remastering and packaging. Credit must be given to Eisenwald for doing justice to this oft-forgotten gem, which also has some truly haunting and evocative album art that perfectly encapsulates the album’s sound.

When all is said and done, catharsis is what is really at the heart of Withering Illusions and Desolation. While it may not be a genre classic like its successor, this is high quality atmospheric black metal that deserves to be heard.