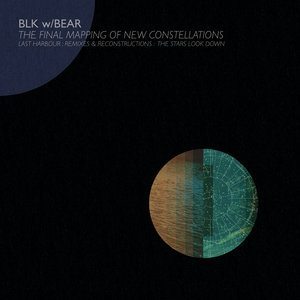 It’s undeniably an intriguing idea, to take the remix of a single song (Last Harbour’s ‘The Stars Look Down’) and, using the sound contained within, to create a whole record. That’s what BLK w/ BEAR have done here, on a release that marks the debut for newly founded experimental label Little Crackd Rabbit.

The result is a nightmare that gradually sneaks up on you as the record progresses, the finite sounds provided by the original track becoming ever more claustrophobic over the duration. It’s a granular record, full of cosmic drones colliding purposefully with dustier, somehow almost incomplete counterparts. At its best, this approach pays dividends, and there is little denying that somewhere within The Final Mapping of New Constellations is a sonic holy place, where the traces of ‘The Stars Look Down’ have been reassembled into a glorious whole.

Having said that, the pitfalls of this record’s ambitious ideology are also present, and getting to that holy place is perhaps a little bit more difficult than it needs to be. The risk in creating avant-garde music via avant-garde approaches is that the humanity (of feeling rather than simply of non-computerised sound) of a piece can so easily be lost. At times on The Final Mapping of New Constellations this problem unfortunately rears its head, which is not inexcusable but slightly disappointing.

Similarly this is an experiment that some may accuse of overstaying its welcome. The undercurrent of similar textures and sounds over the course of the album is part of its modus operandi of course, but nevertheless it is also a significant part of its biggest flaw. For, even at just forty-seven minutes, The Final Mapping of New Constellations occasionally loses its momentum, especially during the ten minute ‘Grand Order of the Eastern Star’.

It is no matter. BLK w/ BEAR have still created something unique and thought provoking with this release. As a challenge to the artist involved this has produced stupendous results. It’s just a shame that the rewards may not be quite so apparent to each and every listener, but then art is a selfish business, and your approval may not be quite necessary. Thankfully for these ears, The Final Mapping of New Constellations is something I can wholeheartedly approve of.