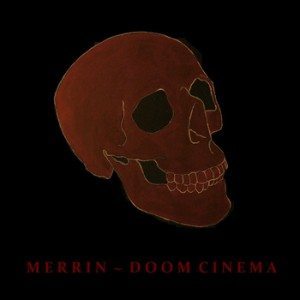 Merrin are three musicians from Northampton, Chris Purdie on guitar, bass and synth, M Andrew Lawrence on drums and Misha Hering on additional keys on 'Shakma'. Merrin describe themselves as soundtrack doomsters and have brought out a three track EP called Doom Cinema that has been recorded and mixed by Misha Hering at Holy Mountain Studio.

This EP pays homage to John Carpenter's style horror, Giallo, Southern US thrillers and Straight to VHS horror movies from the late 80's. With excellent elements of drone, doom, sludge and synth Doom Cinema is heavily influenced by soundtracks from films like The Exorcist, Southern Comfort, Christine and I have to mention this one but still to see it Shakma. It’s about a killer baboon!

Merrin’s musical influences are Earth, Sunn0))), Bongripper, and a personal favourite of mine Goblin, so these guys have really, really good taste. The three tracks on offer are Plymouth’, 'Cajun Swamps’ and 'Shakma’ (yes the killer Baboon) all three tracks are very different and show a versatility to embrace the soundtrack genre.

The intro to 'Plymouth’ starts as all good soundtracks do fading in with a repeated tune that then has everything built up around it. That may sound easy but it only works if the initial tune is good enough to carry the rest of the song and in this case is really is. Some lovely guitar playing, pounding drum, synth and a heavy bass helps build this track to its peak. The intro returns only to fade back to whence it came. I miss it already.

'Cajun Swamps’ has a drone guitar that was born and bred in the heart of Louisiana and played so beautifully you will feel your neck getting red as you listen to it. What a riff!! There is more to the Deep South than banjos and I’m sure the great Dylan Carlson would appreciate this track.

The last track 'Shakma’ is a build up of guitar, bass and a haunting Eastern flavour keyboard piece that will stick in you head well after the track has finished. The atmospheric doom is soon shattered by a heavy sludge guitar riff. This would be great to hear live and very loud!!

Merrin have tapped into a musical genre that has been pushed to the side for to long and by picking three different styles they have opened a big window of opportunity. Anybody that is not sure about film soundtracks have  a listen to John Carpenter's  Assault On Precinct 13, Escape From New York, Christine and Halloween or the Blade Runner soundtrack by Vangelis. Then go to the masters of the soundtrack, Goblin and listen to Suspiria or Profondo Rosso. That selection is just a drop in the ocean.

Merrin have captured the essence of soundtrack music and hopefully will pursue it even further and if you pop over to their Bandcamp you’ll see some very interesting merchandise on offer to accompany this EP.