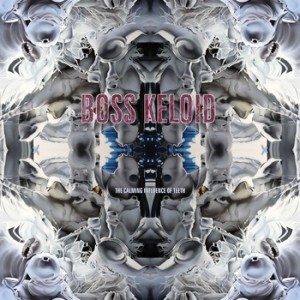 Is the UK scene in the best health it’s ever been or are great and interesting bands just easier to find because of streaming websites like Bandcamp? Hailing from Wigan we have Boss Keloid throw their hat into ring by presenting their debut album proper The Calming Influence Of Teeth. They certainly have an interesting mix of styles, combining southern rock riffs, obtuse time signatures and clean bellowed vocals to a deeply satisfying affect.

Whilst their initial EP Angular Beef Lesson had a more rock n roll vibe (as well as funnier song titles) the intervening three years has seen this replaced with a heavier slower 90’s groove which added to the aforementioned elements bring to mind a combination of the finer points of Mastodon and Pantera.

Their formula has enough subtle elements for Boss Keloid to be able to claim a distinct sound of their own as the opening track ‘Winehorse’ will testify.

Admittedly this chosen formula is a furrow they plough relentlessly throughout the albums ten track running order, and it is to the credit of the individual performances and the variance of the riffs that each song retains a strong sense of individuality and at no point begins to become tiresome.

The main reason for this is the bass, normal operating procedure for a groove driven metal band is for the bass to simply be a foundation block for the guitarist(s) to work their magic over, but here it is on equal footing and allowed to roam with (relatively) comparable freedom, ‘Locking Stumps’ and ‘One For The Floor Boards’ are perfect examples of this.

Also this means that as well as having enough immediate grooves to enjoy on first experience it also reveals surprising little details on repeated listens.