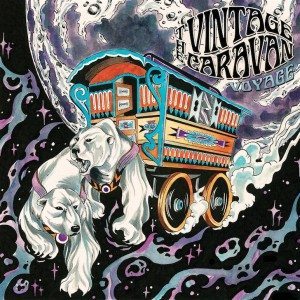 Somewhere around the early 2000’s, the gods of hard rock seemed to have been sleeping contentedly with their copies of Led Zeppelin’s II wrapped in their arms. Despite the efforts of the garage rock and post-grunge movements, the gods didn’t seem all that interested in awakening. When The Dead Weather and Them Crooked Vultures, among others, cranked their amps up and brought back the raw, filthy hard rock of yesteryear, the gods finally shook from their slumber. The flood gates opened and over the past few years, the likes of Graveyard and Natural Son have been part of a true hard rock revival. Among them is The Vintage Caravan, hailing from Reykjavik, Iceland.

The Vintage Caravan started as two childhood friends, both only 12 years old at the time, playing music with inspiration drawn from their parents’ music collections. In just a few years they had recorded a full length LP and began touring all over their home country. Soon thereafter they offered up Voyage. The album is a psychedelic journey bent on leading the listeners down the stranger avenues of the mind. The young group consistently exhibits their extraordinary talent and knack for progressive hard rock throughout Voyage.

The first track, Craving', wastes no time in getting Voyage going. It is only one of the many fast paced, riff heavy songs on the album and is a fast lesson on what The Vintage Caravan are capable of. Guitarist and vocalist Óskar Logi’s aggressive vocals come through soon after the song has begun, and all the parts of the hard rock equation are in place. On the second track, 'Let Me Be', Logi lets his guitar loose over a chunky, head banging bass and drum driven progression.

'Do You Remember' offers a look into the bluesy side of The Vintage Caravan, and it comes across very well. Logi reminisces about a too-long lost friend over reverberating guitars that sound like they came right out of Led Zeppelin’s Houses of the Holy. 'Do You Remember' leads into the psychedelic trip over the rainbow that is 'Expand Your Mind'. Their video for the track, directed by Bowen Staines, is a perfect companion to the song- incredibly triply while maintaining its cheekiness. From the first measures of drummer Guðjón Reynisson’s pounding solo to the expansive, varied movements throughout the song, 'Expand Your Mind' is The Vintage Caravan at their best. Alex Örn gets a chance to take his bass for a walk through a fantastic solo as well.

Örn also leads the charge throughout the expansive 'Winterland'. The track begins with a movement reminiscent of Led Zeppelin’s 'No Quarter', and then into a thumping middle passage and finally into a fantastic guitar solo from Logi. 'The King’s Voyage' is a constantly varied twelve minute journey through a myriad of hard rock genres and influences. The intro is even reminiscent of present day stoner metal.

A young group with as much talent and potential as The Vintage Caravan doesn’t come around very often. They are clearly very adept at what they do, and are amongst a plethora of hard rock bands seeking to fully resurrect the genre. Voyage is a fantastic album of throwback hard rock with just the right touch of progression injected into it, and is a more than worthwhile album to give a listen.