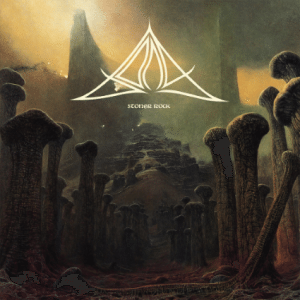 Out on March 3rd through

The Lords of Drone are back with a Bong!!

This is the new album released through Ritual Productions from the mighty Bong and with the very amusing title Stoner Rock.

"It is a tongue-in-cheek dig at our usual classification as stoner rock and what the term has come to represent. The idea is to create our own definition of 'stoner rock' by creating an album so utterly stoned and repetitive to be a million miles away from the usual definition."

They seem to have been caught up in the genre minefield and if you know Bong’s body of work you will understand but if this is all new to you then have a listen and you can make up your own mind. Most of Bongs studio albums consist of two tracks and Stoner Rock has two mammoth arrangements, ‘Polaris’ at just over 36 minutes and ‘Out of the Aeons’, just under 36 minutes.

‘Polaris’ is drone at its very best. You're going straight in with the heavy guitar riff repeated over the bass and drums. Leading to the imposing vocals of Dave Terry bellow from somewhere above the stratosphere. Stoner Rock has enough variations in there to make this a powerful piece of music. The Shahi Baaja and guitar effects flow through this track like an unclogged vein of cosmic trance making 'Polaris' shine with as much light as its namesake.

‘Out of the Aeons’ is much heavier on the drums than ‘Polaris’, pounding away in the background keeping the whole track together while the mighty riff just keep vibrating and echoing in your ears. Great stuff but there is also a mellow feel to this piece. This comes from the Shahai Baaja. Its Indian vibe will hypnotise your mind while you freefall into the abyss with nothing to hold on to but the narrative vocals of a time forgotten.

The brain is still alive

This is the sound that I and many more have come to love about Bong. They have an ability to take you to strange places and experience musical emotion that some other bands just can’t do. I’ve been lucky enough to see them live on a few occasions and have always come away from the gig wanting more and this is one album I’m looking forward to hearing live.

I also want to mention the album cover. Bong has produced some great covers in the past, always imaginative but the Stoner Rock cover is excellent. The art work is by the late Zdzislaw Beksinski. I’m ashamed to say that I had never heard of this guy before but his art is amazing. I would highly recommend looking at his work while listening to Bong, it will be an evening well spent.