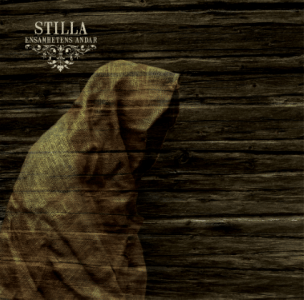 Out on February 10th through

Andreas Pettersson, lead vocalist of Swedish black metal group Stilla, noted in a previous interview the stark isolation of his home country’s harsh winters and their effect on his music. All Nordic black metal is characterized in one way or another by the darkness and cold of the Northern country, but the bitter chill can be buried among other motifs and gimmicks. On Stilla’s new album, Ensamhetens Andar, the band summons only the most desolate, barren and bone chilling black metal in recent memory.

What stands out quickest on Ensamhetens Andar is the extremely high quality of the production. As is their nature, most black metal albums are made to sound like they were recorded using a computer microphone, a fact Varg Vikernes divulged about recording vocals for his legendary band, Burzum. Instead, Stilla has chosen to wash their instruments in just the right amount of distortion and reverb without washing them out. This way, every instrument remains sufficiently brutal but can be heard with just the right amount of clarity as well. Though this may be unusual in regards to black metal it serves Stilla’s purposes very well, and makes Ensamhetens Andar all the more enjoyable.

The superior production and masterful instrumentation may be due to Stilla being somewhat of a Swedish black metal super group. Members Pâr Stille, Adreas Johansson and J. Marklund are also in Bergraven, and a handful of other Swedish bands. Pettersson has been a consistent presence in the Swedish black metal scene for some time, and his presence in Tilla perfectly rounds out the group.

The album opens with a charred bass intro from Johansson on 'Vandring utan spår'. The short solo is the perfect concoction to begin the album- the progression is infectious, and the song quickly injects the listener with deathly cold. He is soon joined by Pettersson’s grisly vocals. 'Vandring utan spår' sets the mood for what will be an almost non stop assault on the senses throughout Ensamhetens Andar.

The third track, 'Till slutet', is a fantastically morbid track that trudges along through the first passage, then is led onward by Stille's echoing reverb guitars. A section in the middle is occupied by plucked acoustic guitar and bone chilling guttural vocals. The song’s transitions and movements are sewn together perfectly, creating one of the most harmonious yet bleak tracks on the album.

'Till slutet' also encapsulates the general atmosphere of Ensamhetens Andar. Although the album is first and foremost black metal, themes of nature and the occult come through as well. Most of the album feels like a woodland conjuring or a terrifying journey through the spirit world. The final track, 'Skuggornas dop', encapsulates this atmosphere even further. Tremolo guitars are joined by high pitched, echoey synths that create a truly epic feeling, which charges on through the rest of the song.

The chilling winds of the north course through Stilla’s Ensamhetens Andar. They expand on the sound they established with their previous record Till Stilla Falla, but Ensamhetens Andar manages to be something truly groundbreaking. It is a multifaceted record that does virtually everything with the right amount of skill and restraint, and it all adds up to a remarkably bleak and heavy piece of music. Ensamhetens Andar sets the pace for black metal very early on in 2014.