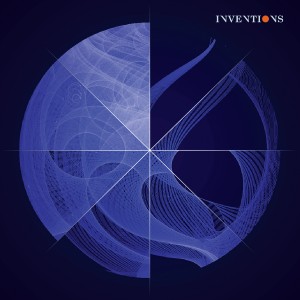 I was passed along the Inventions’ self-titled début LP at a unique point in time on my musical listening trajectory. My interests in one genre or another tend to fluctuate in inscrutable patterns, generally with one or two genres drawing most of my attention for months at a time. As of writing this and listening to Inventions, I am slowly transitioning out of a phase in which my interests focused mainly on post-rock. Regardless, the allure of the Inventions LP was irrepressible. While it may sound like a contradiction, Inventions manages to be ambient and post-rock, while introducing an almost entirely new and vibrant standard to the mix.

The group is made up of two post-rock heavy hitters (if there were such a thing) Mark T. Smith of Explosions in the Sky and Eluvium’s Matthew Cooper. Longtime friends and label mates on Temporary Residence, the duo’s collaboration seemed written in the stars. Cooper’s music is characterized by sonic textures more than movements or instruments, thus the label “ambient.” Smith’s work in Explosions in the Sky is a single part of a puzzle that has become one of the best post-rock bands in recent memory.

It is no surprise, then, that their styles blend together with distinction and fluidity on ‘Inventions.’ Smith’s signature guitars shimmer over humming soundscapes that Cooper no doubt had a strong hand in. From the first song onwards the album washes over the listener, in the vein of Jonsi and Alex’s Riceboy Sleeps. This type of music is, on its exterior, simple and accessible, but beneath the surface there is an immersive, bustling world of activity.

This is evidenced early on in the album by the second song, 'Flood Poems'. Smith’s guitars establish a clear presence first, then shift into reversed variations and reverb. Percussion, synths and pastoral vocals join in beneath the guitars as the song gradually builds. 'Flood Poems' is a track that is mostly driven by Smith’s guitar, while many of the other songs air on the side of Cooper’s signature ambient textures. However, the guitars fade in and disappear in a welcoming, warm fashion. The second half of the song introduces a new, more present guitar progression and deep, throaty background vocals. All of a sudden the song feels like a soundtrack to the sun rising over the Sahara desert.

The album’s second half begins with 'Peaceable Child', an example of another intriguing theme on the record. Smith and Cooper seem to be toying with variations on tempo and how they interact with each other, and the impact is grand. This occurs here as well as the next track, 'Sun Locations/Sun Coda'. At certain points in each track there are equally present elements of fast paced percussion or pulsating synths that are contrasted by the sprawling electronic textures otherwise present in the songs. It keeps the music more than interesting, and is a welcome variation on the ambient genre.

Inventions closes with the thematically consistent 'Psychic Automation'. It reintroduces nearly every musical theme explored on the album into a single, brief denouement. Electronic elements intertwine with guitars, piano, and the return of the throaty vocals from 'Flood Poems'.

It concludes and encapsulates the album in a proper manner, as if Cooper and Smith are saying, “We’ve revealed everything from this story, for now". Here’s to hoping this wonderful collaboration carries on to another chapter.