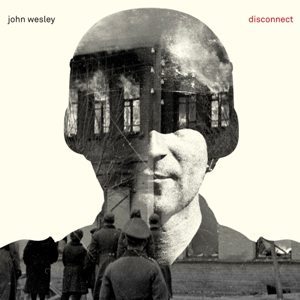 I’ll admit to being ignorant to John Wesley’s work (both solo and side-man) prior to this, his sixth solo release, entitled Disconnect. What a fool I have been. How could I have been unaware off such a musical giant? Well technically I wasn’t unaware…..

Wesley began his career in the early 1980's where he founded Autodrive. In the early 90s he embarked on a solo career and became the premier opening act for Marillion on seven consecutive tour legs around the world where he played for hundreds of thousands of fans. In 1998, Wesley embarked with White Lion frontman Mike Tramp on an extensive tour as premier opening act for the prestigious Peter Frampton/Lynryd Skynyrd tour. Following this was several world tours as lead guitarist for Scottish neo-prog legend Fish. In 2001, John Wesley was the primary co-writer of Fish’s Fellini Days album. That’s where I come in, in a sense. Being a huge fan of Fish and of that album particularly, I approached Disconnect with a sense of anticipation and interest. After all, I now knew that I had heard some of Wesley's music (via Fish) I was primed and ready to go.

Opening with the title track, there are tinges of Porcupine Tree’s ‘Anesthetize’ musically (hardly surprising given Wesley toured with PT as guitarist and backing vocalist through four album cycles and over 450 shows  as well as performing guitar duties during Steven Wilson's North American Grace for Drowning tour). Wesley’s voice is haunting and ethereal lamenting that someone is “Here….. In here…. But you’re not…. Here”. Whereas the album opener whisks you away on a bed of clouds follow-up ‘Any Old Saint’ begins with a buzz saw guitar riff and sees Wesley telling us that “We fight and give way” before he and guitarist Dean Tidey share solo duties in the kind of emotive, eminently hummable guitar solo that David Gilmore no doubt dreams about. It’s so uplifting and rapturous that I worried that the rest of the album would seem like downhill after this epic.

Again, idiot fool that I am.

‘Window’ is a beautifully constructed tune with its pastoral opening guitar figure and Wesley’s questioning whether we’ve “lost the capacity to care”. ‘Mary Will’ is the kind of song that pulls you through the wringer, that leaves you feeling drained yet manages to pull you up by your collar and tells you everything is going to be ok. ‘How Goes The War’ starts with shock and awe and then slides back into a gentle pattern that ebbs and flows in volume and anger. Much like wars themselves actually. Many would baulk at the idea of closing an album with a song like ‘Satellite’ with its acoustic driven melodies and evocative soloing. But it’s testament to the song writing that it feels so, so perfect to end of such a non-bombastic track.

Musically John Wesley is up there with your Gilmours, Wilsons, Rutherfords et al. He can switch between gentle picked acoustic passages to aggressive, ice shards of guitar to solos that brings you to your feet with tears in your eyes. Lyrically, the Roger Waters comparisons are justified. Not content with just letting his music speak for him, Wesley wants us the listener to pay attention to what he’s say with his words as well as his guitar. This is John Wesley’s 7th solo outing and I’m worried about going into his back catalogue. Why? This album is so good I worry that it’ll never be beaten. This is an album that displays a musician at the peak of his powers; having taken on all sorts of influences over the years to mix into one pot that is distinctly his own work. It’s raw, it’s angry, it’s heart-breaking, it’s…… an amazing piece of work. Breath-taking in scope and design. Now stop reading this and go buy it.