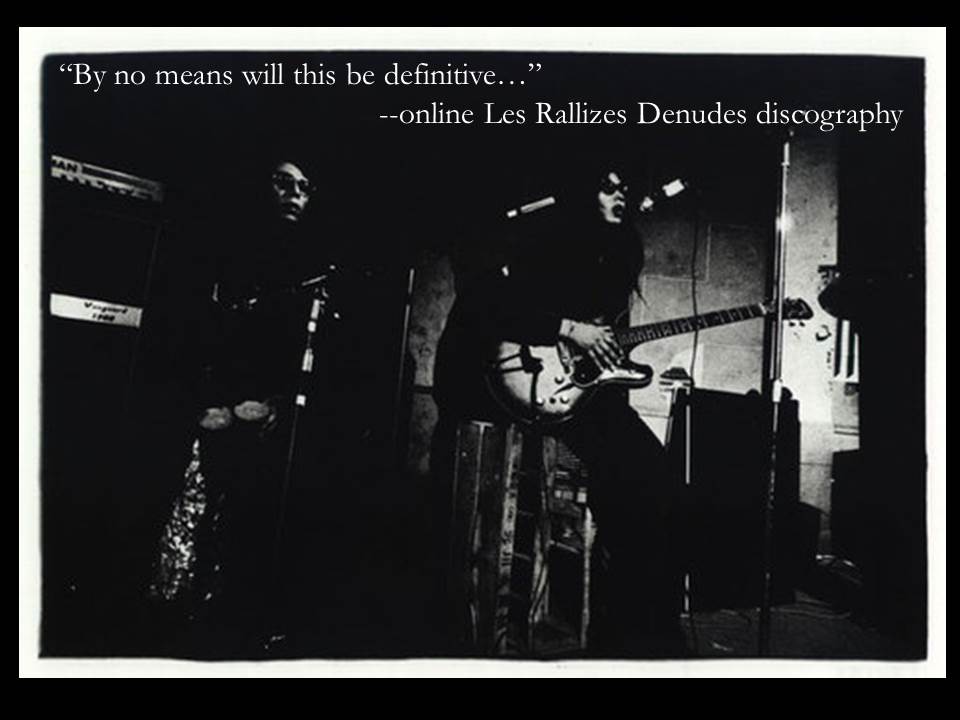 Ontology is a branch of philosophy dealing with what kinds of “things” there are and how to define their boundaries. Musical ontology, then, concerns what music is and what kinds of musical things there are: symphonies, arias, notes, chords, tracks, albums, riffs. Here I take a look at rock music categories and discuss the ontological noise of the Japanese group Les Rallizes Denudes.

Scholars of popular music ontology have discussed the issue of the fundamental unit of rock music. The “song” has been suggested, though that fails to distinguish between two performances of the same song by different musicians. “Songwriting” skill or ability, however, is still used as a measure of authorship and authenticity. Andrew Kania has suggested that we take the recorded “track” as the ontological unit of rock music, as ‘the primary focus of critical attention,’ and since the 1960s, the “album” has been another unit of rock music, seen as artistic statements by defined groups. Since then, live performance has existed in a strange parallel to recordings: firstly a standard by which recordings were measured, before fans came to demand hearing tracks as-played-on-the-album, to oxymoronic (and often horrible) “live recordings.” The recognisable “sound” of a particular band might be determined by technical equipment, the studio-as-instrument, or the techniques of particular producers, but are defining characteristics of rock groups and subgenres.

Bootlegs, leaked studio recordings or audience tapings of live shows, complicate things. These represent something of a betrayal, of authorial intentions in crafting finished musical objects, or of the ephemeral intimacy of live performance, though this is perhaps an ideologically coded way of saying that exclusive contracts have been broken. Occasionally though, the illicit deal pays off, and a different kind of authenticity is acquired, in which unguarded moments of spontaneous creation are captured. Another (doubly ontological) musical object is a canon: a musical “thing” made up of a critically-sanctioned list of great “things” like songs, albums or bands. While these categories (songs, tracks, albums, concerts, sounds) and polarities (live/recorded, classical/rock, official/unofficial) structure conceptions and discussions of rock music, equally fundamental to rock music are the ways they are challenged and transgressed, such as with bootlegs, cover versions, new technologies and new modes of creativity.

This entire musical ontology is undermined in the noise of Les Rallizes Denudes: a band otherwise known as Hadaka no Rallizes, otherwise known by various other names; led by mysterious guitarist Mizutani, and featuring a revolving cast of often nameless musicians, and sometimes not even featuring Mizutani; going by a French-language name containing a word that doesn’t exist in French; never releasing an official album (except for one side of vinyl on a compilation), and only existing on murky studio demos, dubbed and re-dubbed copies of audience recordings or soundboard tapes. In the lowest of low fidelity, Les Rallizes Denudes ask: fidelity to what? 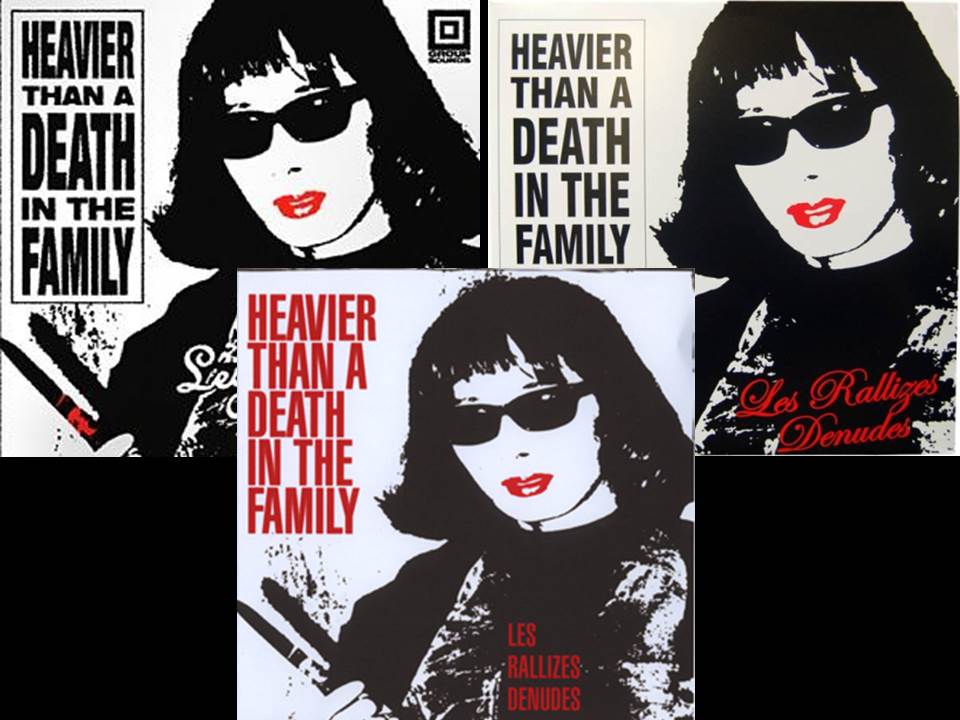 For a band who never release albums, this band have hundreds of albums, none of which are albums. Only available through bootlegs, mostly released on dubious record labels, these are copies of audience tapings of live shows that emerge with vague or contradictory details of the supposed performances. Some are confusing mixes of demo fragments and soundboard excerpts. Two of the best known “albums” are 77 Live and the legendarily-titled Heavier Than a Death in the Family. However, 77 Live is often confused with Mars 77 Tachikawa, and Death in the Family has apparently been released several times with completely different material on it, with the latest Phoenix Records version has most of what is on 77 Live with some other bits probably from a different year. There are 10, 15 and even 50CDr sets of material, much of which reproduces material available elsewhere (or says it does and actually doesn’t). As an artistic whole, a sensible, defined unit of analysis, a collection arranged to fit a particular medium, or even as a document of a particular performance, any sense of an “album” is rendered absurd. Errantly titled Youtube postings, and blogs collecting ambiguously-attributed download links add another layer of discographical chaos. As well as these releases which stretch the format of the album to breaking point, the band use the limitations of technology in other ways to contribute to their sound which speaks of limits and transgression: one of my favourite moments is the distorted wail of the guitar line dissolving into feedback screech exactly as it bends up to a peak, from about 7.00 to 7.25:

The band’s signature sound is constituted, as with many bands, by the idiosyncracies, opportunities and accidents of technology used to record them. But far from supporting the band’s own authority-authenticity in mastering technology to artistic ends, the sound is determined by recording devices at the mercy of batteries, venue censorship, absentmindedness, and whatever the audience recorder happens to capture. There is no studio record to compare with, and there is no “pure” sound of the band. Mizutani (reportedly!) firmly favours noises, crackles and impurities: paradoxically valorising aspects of sound over which he has no control, in presenting how he thinks it should sound. A “high quality” Rallizes sound then, without any imperfections, wouldn’t sound like them at all. This extends also to sleeve artwork and titles: audience members guess or invent song titles, and provide vague photos or photocopies as covers. 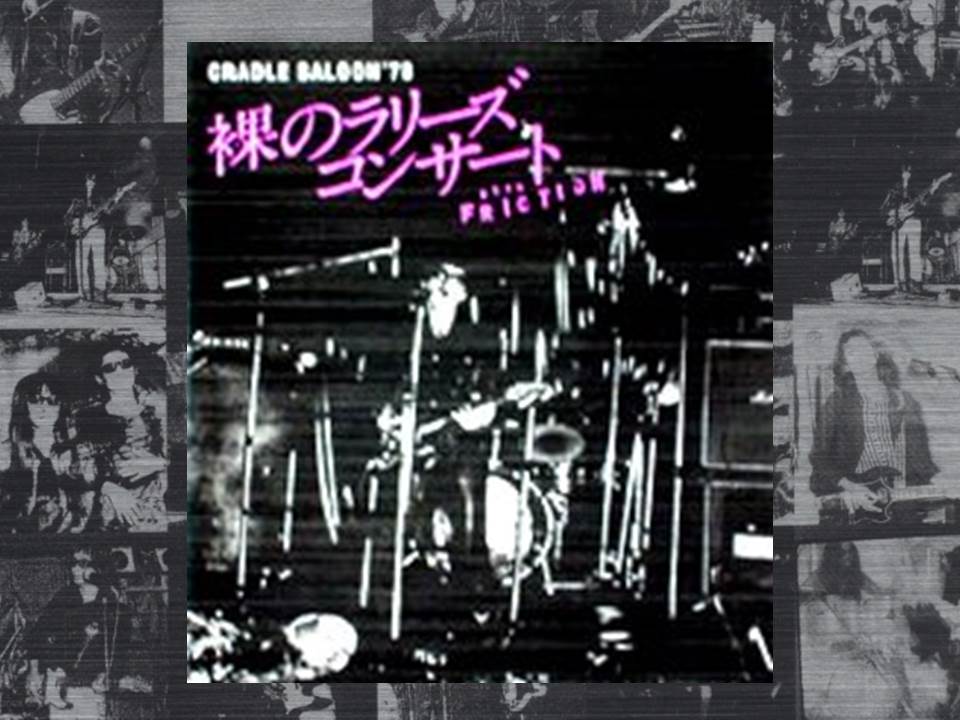 Rallizes refuse association with “tracks,” relinquishing decisions about when pieces start and stop to audiences and lo-fi technology, by never having any originals. Cradle Saloon 78 contains two recordings of the same performance, with track divisions at different points throughout, and different sound profiles according how and where in the crowd they were recorded. Together they explode the myth of faithfully representing live performance: both and neither are authentic representations. The band also undermine songwriting and familiar ways of understanding musical creativity, while retaining amongst fans an aura of musical genius. One of the band’s best-known numbers is ‘Night of The Assassins,’ the band playing epic, time-collapsing versions at concerts over and over again for decades, but it’s far from an original composition or even a cover version by normal understandings. They simply took the elementary bassline from Little Peggy Marsh’s 1967 ‘I Will Follow Him,’ and they followed it, endlessly and aimlessly, for years and years, never getting anywhere except a kind of noisily compelling stasis. It’s not a cover or a new song, a radical departure from Little Peggy March, but without recognisable creative development.

The idea of a canon of Rallizes songs is also tested to breaking point: for 30 years, the same few songs were repeated, endlessly. Their canon is so fixed that it challenges the concept-- a canon might appear to imply a stable repertoire, but this relative stability is based on the expectation that this canon has been or will be added to and developed. Not so here: 20 minutes of guitar noise over a simple bassline in 1967; 17 minutes over the same bassline in 1996. Yet no distorted overdriven guitar is quite the same as any other. Each version is so undeveloped, but also so different, that “songs” and canons cease to meaningfully apply.

Other hilariously, dysfunctionally, gloriously quixotic moments in which Rallizes simultaneously uphold rock mythology and ridicule it, are the entertainingly odd Ethan Mousike concert footage, where (legend has it) the filmmaker was only permitted to film half the stage, from some distance; the Great White Wonder compilation (named after the famous Dylan bootleg), which hopelessly fails to offer the archival completism suggested by the box-set format; and not least, the famed upstaging of rock’s frequent “radical” posturing in bass-player Moriaki Wakabayashi’s involvement in a Japanese Red Army plane hijacking. 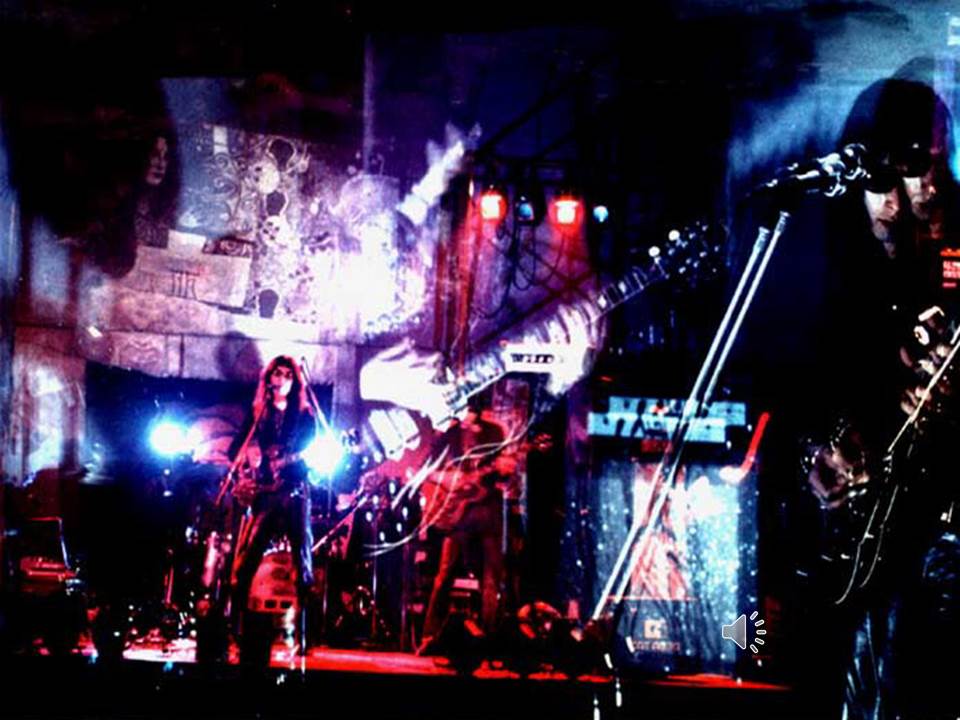 As anthropologist Mary Douglas noticed, noise and dirt are names we give to the bits and pieces that don’t fit our neat, compartmental grids for understanding the world. These categorical anomalies can acquire a certain power through defiant resistance to interpretation. Rock music has always sought this kind of transcendence in transgression, so it is no surprise that a cult has arisen around this group who aren’t really a group, their recordings which were never theirs, and their sound which is recognisable only through its own degradation and imperfection. In liner notes for Great White Wonder, Moshe Idel ironically notes that the band’s sound ‘regressed even as it evolved, ending up […] exactly where they had started from,’ frustrating any of the familiar rock fan/critic attempts at definition, categorisation and hierarchy. In most listener descriptions, the key issue is a recounting of a fleeting experience of an overflowing noise, the letting in of an ephemeral, broken transcendence, the apocalyptic experience which obliterates any categories and divisions that might attempt to take hold of it. This is the ontological noise of Les Rallizes Denudes:

A version of this article was presented at the Royal Music Academy’s Challenging Musical Ontologies event, at the University of Nottingham, November 2012.