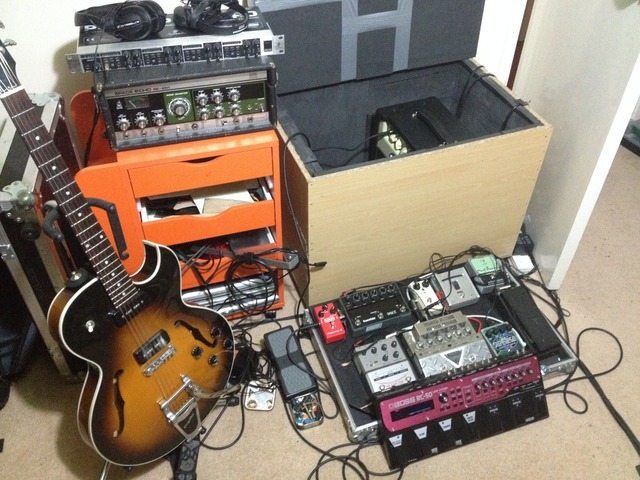 There’s no reason why anyone would have a clue who I am, so to give a little context - I write for, and perform with, my 7-piece instrumental group The Monroe Transfer; I play in a band called Fireworks Night; I write and produce music & sound for a theatre and live performance; and now I’m releasing some solo ambient, modern classical, noisy albums, beginning with On není jako on and Grey season.

First up - ‘make’ is an interesting word, when we’re talking about music. One very short word covers a huge range of skills that used to have to be split across a number of people - composition, performance, engineering, production, manufacturing and distribution (and nowadays this often follows on into marketing, PR, radio plugging and all that jazz) can all be done now by one person with an off-the-shelf home computer. As a way of working, there are obvious benefits- by not being dependent on anyone else, you can be in control of everything yourself. The downside is that you have to do everything yourself.

So, in terms of making the music, I’ve done a number of those roles separately (composer, performer, producer), and sometimes all together. In terms of writing, I think of myself as a composer first and a guitarist second, though I’m not sure others would agree. Given that I’m almost entirely self-taught, I’m not sure that I should use such a grandiose word as ‘composer’, especially when there are people like Nico Muhly wandering around and doing proper composing. I suppose what I mean is that I try to make sure that each instrument’s part works in the context of the whole piece of music, and that quite often my own guitar playing doesn’t even feature.

Broadly speaking, I try not to have a fixed process when writing or producing, or dealing with the grey area between the two. I worry about that analogy of the terrible carpenter: if the only tool you have is a hammer, you treat everything like a nail.  Once you have a process that you apply unthinkingly to the writing process (or production, or engineering, or marketing, or…), there’s a danger that your music will come out samey.  Or, at least, that’s my fear.

Of course, there’s often a great deal of overlap between the modes of ‘composing’ and ‘production’, and the proportions of time spent of each element will be different for each project. Having said that, I’ll normally have a pretty good idea of what that proportion will be when I start. For something like Grey 8: nocturne from Grey season, written for piano and ‘cello, I knew that the mix would be just those two instruments, with only a little reverb, correcting EQ and a little compression on the master buss. Grey 6, on the other hand, is an improvised guitar part, played live through an Audiomulch loop & granulator patch that I’d made for the purpose; while I knew the kinds of sounds that would come out of it, it was a very different style of composition.

Something that had a different method of composition again was On není jako on, developed from a soundtrack written to accompany a 2011 production of the play of the same name in Prague. In this case, the music had to mirror the play itself- the actress shifted between presenting four characters, with no clear delineation between them, and the instrumentation of the score reflects this fracturing of personality, using a combination of acoustic, amplified and electronic instruments.

The music makes use of what Schoenberg termed klangfarbenmelodie (‘tone colour melody’): while traditional composition prizes melody and harmony (in essence, an ear-pleasing sequence of changes in pitch), klangfarbenmelodie instead focuses on changes in timbre and quality of the notes: on a guitar, for example, many notes can be played in different positions on the fretboard, with each note having a different quality. On neni jako on uses this principle by way of a simple, four chord structure spread across the instruments, repeating and restating the melody lines in different octaves and rhythmic patterns, using a variety of playing techniques to produce the notes, as well as numerous combinations of the instruments themselves, to create a constantly changing sound within a static harmonic structure. Just as the idea of character and meaning are buried in the dense writing, so the music is swathed in crackle and hum, along with processed recordings of the rehearsal process, whose volume swells and fades around the instruments.

There’s a lot of equipment and software that gets occasional outings on different recordings; the most indispensable equipment, though, is Cubase, Audiomulch, a well-stocked pedalboard, and a selection of bows, picks, capos to whack a guitar with.  And, depending on the project, a large number of very talented musicians to turn my crummy scores into actual music.

On neni jako on is released on 31st March, 2014, in an edition of 72 numbered CDs in hand-made slip cases. Grey Season will be released as an edition of 250 numbered LPs on heavyweight vinyl in letterpress printed sleeves with artwork by Steve Gullick in the first half of 2014. Both releases will be available digitally from iTunes and effrapress.co.uk. 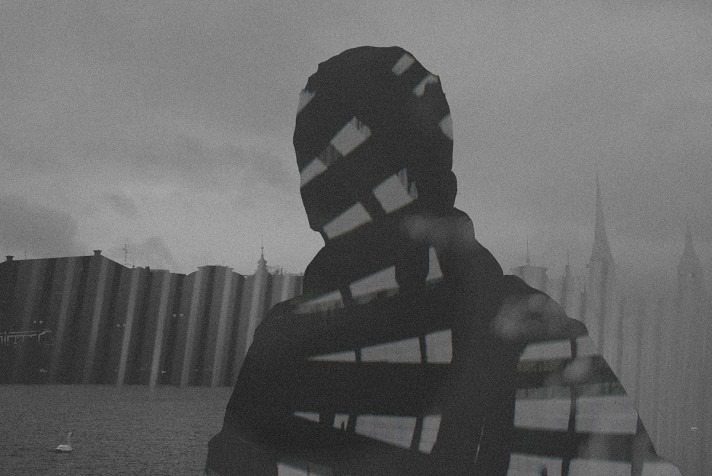 Benjamin Bland (Features Ed): Under the name Postdrome, Charlie Floyd has created two of my favourite ambient/drone records of recent years. First came 'Never Without', in 2011, and earlier this year he released 'Where the King Will Land', which is equally joyous a listen. You can find both his records available for streaming and pay what you want download at his Bandcamp page. Prompting a new direction in the Music vs Noise column, Charlie has written a piece on how he goes about his work and what inspires him to create his fascinating music. So, without further ado...

Postdromewas a small project I started back in late 2010, since then I've released two solo albums and a joint album with Costa Rican musician EUSand French band Saåad. When I began this project I had no knowledge of musical creation whatsoever; I had absolutely no idea how to approach it. The only thing I did have was a vast library of music to influence me and a strong desire to make an album. I've been hugely into music for years and wanted to finally start making something myself.

I had no idea at that point what the first album would be, so honestly the sound of it was dictated mostly by cost. Rather than settle on a genre and work from there it became a challenge of what noises could I make with no money or instruments whatsoever. Because of this I started using samples, something I could play around with for free (so long as there were no rights issues). I'd pull apart songs that I loved and grab second long snippets to repeat, slow down or affect in any way I could until I had reached a sound similar to the one that I was after. The only prescript of this method was that the original sample had to be destroyed beyond recognition so that there were no copyright issues (something I really didn't want to have to face if it came to it). On top of these samples I added layers of distorted vocals, piano playing, field recordings, and anything else I could get my hands on for free.

A lot of the sourced samples came from old cassettes; I picked out unlabelled tapes purposefully and added a load of digital filters to them live before listening to anything (more recently a lot of the tapes are run through guitar pedals and other analogue effectors), and I still have no idea what a lot of the samples used are actually from. This method made a lot of the creation process down to chance, something I felt was an interesting way of working and one that was full of surprises. Unsurprisingly though the results were often unusable; the occasional time I did stumble across something that worked well easily made up for this. Hitting upon that random altered sample that sounds great instantly is so exciting and a sudden discovery like that can sound better than something you spend weeks perfecting.

I used these random samples as a starting point a lot of the time. Getting that beginning idea down is always the hardest part of creation and leaving it to chance seemed like a good way of cheating this problem. From that point building on top of these loops or clips became much easier. Most of my ideas come out in the development rather than having rigid plan for each track, and while a lot of songs do have some sort of initial plan to them, they're likely to change completely over the course of the creation process.

The other thing that obviously influenced the sound heavily was the music I was listening to at the time. My musical influences for Postdrome are pretty varied, but they all play a huge role in the development of the sound (I'll try to avoid just writing a six page list of musicians I love and was influenced by). Of course some of the nspiration comes from slightly similar drone/noise/ambient artists like Lustmord, Wolf Eyes, Jefre Cantu-Ledesma, Oneohtrix Point Never, and Natural Snow Buildingsbut also from more popular artists such as Swans,Sonic Youth, and This Heat. While many different aspects of each of these artists music influenced me in different ways, their ability to build atmospheres and their use of texture plays a huge part in my music and is probably the thing that ties most of these influences together. A lot of other influences came from contemporary jazz and also the ideas of repetition found in minimalism. For me a large part of creating music is the research into sounds, and listening to music is always key to the creation process.

After finishing the first album I was contacted by Romain Barbot from the band Saåad and we starting working on a collaboration, working with EUS and Saåad was such a completely different experience. I couldn't spend months slowly building up tracks as I was doing before, but instead I had to have something fairly final created much faster. We would then e-mail these tracks around and each edit/layer the others work before sending it back in an entirely new form. Sending unfinished tracks between each other brought out a lot of new ideas and was a great way of doing things. Being able to just e-mail some track you've created and are happy with and have it return improved and added to in ways you would never have thought of was such a satisfying way of working.

Since the collaboration I've been trying out lots of new techniques and styles. Using Max (a visual programming language) has allowed me to create things I'd never considered before, and I recently worked on a program that takes a 1-3 second sample from a cassette every few seconds and then overlays them all in interesting ways instantly and almost automatically. These new methods have allowed me to explore further into music creation, and I've been using them along with granular synthesis and distorted guitar playing to further build textures. I think I've managed to pick up a fair amount over the last 3 years of working on music and I just going to keep blindly exploring until I hit something new, how the sound will develop or where it'll end up is a complete unknown.