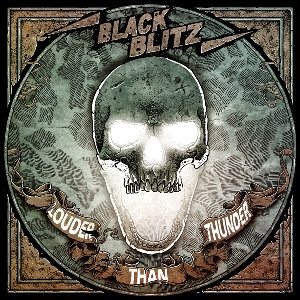 Out Now from here

When a band suggests you review their record because they sound a bit like another band you recently reviewed, it does rather prime you to expect more of the same. Perhaps as a reviewer I should be more discerning. Perhaps I should be more critical of “derivative” music; pointing out where bands take their cues and sounds from. But on the other hand when you get an album with tracks such as ‘Drinking Dynamite’, ‘Louder Than Thunder’, ‘The Call of Rock ‘N’ Roll’ and ‘Satan Is Waiting’ it’s impossible to resist.

So. Black Blitz have a lot to live up to. Such song names demand a certain calibre of music. That is, good. And on their album Louder Than Thunder they dish up a fantastic mix of blues, rock and good times. It’s enough to make me want to buy some denim, leathers and a bullet belt, down a bottle of Jack and stay up way past my bedtime.

‘Drinking Dynamite’ sets up the album nicely with its stop-start riffing and an impressive vocal tone from guitarist/vocalist Thomas Bauer. What’s doubly nice is that Bauer actually sings as opposed to squealing in key. You can hear what he’s saying so while it evokes the range of Scott, Halford and Johnson it’s more in line (tonally) with Dickinson. A definite plus. ‘Going Against The Grain’ has an amazing main riff that swaggers along like an in-his-prime Keith Richards. Tapping your foot, banging your head and attempting to reach the note in the word “going” in the course are all mandatory for this track.

The bluesy swagger remains for ‘Keep ‘Em Coming’ but is balanced with some nice palm muting in the first half of the verse to add some flavour and variety. ‘Turn Up The Heat’ also features this restraint allowing the listener some breathing space with a great solid rock tune. ‘Fire And Forget’ allows bassist Christian Reiter to display some chops as he twists and turns around the guitars and vocals. The most criminal thing on this album is that ‘Satan Is Waiting’ is hidden away as the last track. This is a monster-stomper of a song, full of attitude and balls. Definitely one of the standout tracks on the album.

I’ll admit that I was surprised by this album. As I said back up the top there, I was expecting a certain style of band, a sort of AC/DC blueprint type of thing. What I got has shades of the old Acca Dacca but there is also a lot of Stones/Black Crowes to this album. The vocals certainly make it different (for reasons I’ve mentioned earlier) but it’s also the band’s ability to add groove and bounce to their songs, their ability to rein in the stereotypical licks and fills and simply write great hard rock tunes. It takes a special album to remain on my eyePod after completing a review. I like most of what I hear but to want to hear it again after the intensive review listening period requires a certain magic, a certain spark. Black Blitz have those things. Support them by buying their album. You won’t regret it.