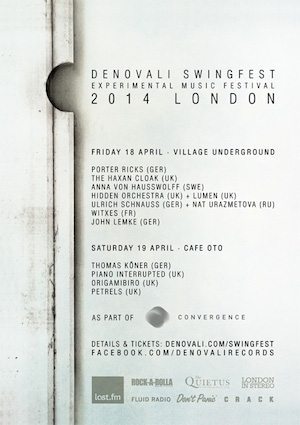 It was pleasing, if slightly surprising, to see Denovali Swingfest return to London this year.  Despite an immense 2013 line-up, including the likes of William Basinski, Fennesz and Andy Stott, the event had attracted few attendees.  Thankfully, Denovali decided to give the festival another shot, with a switch of venue from Scala to Village Underground and Cafe OTO on Friday and Saturday respectively.

Having been somewhat delayed by First Capital Connect, it was the hazy sounds of Witxes that greeted my arrival at Village Underground on the Friday.  Pulsating static merged with devastating peaks of noise were present particularly during the middle of the set, which saw Maxime Vavasseur unleash some of the most uncompromising of visceral sonic avalanches.  The crowd thickened in time for Ulrich Schnauss, the German accompanied by visual artist Nat Urazmetova for a set of disappointingly directionless techno.  I once read somewhere that Schnauss’s music is “dance music for people who don’t listen to dance music” - harsh but, given some of the almost amateurish transitions and dull beats on display here, perhaps not entirely inaccurate.  The visuals were mostly made up of ultra-zoomed in footage of things now rendered unidentifiable, which is seemingly the done thing nowadays?

Saffronkeira was a late addition to the bill after Hidden Orchestra were unfortunately forced to cancel.  Distant and dark ambient soundscapes were the order of the day for Eugenio Caria’s project, complemented rather well by the sombre trumpet of Mario Massa.  Following Caria and Massa was Swedish singer-songwriter Anna von Hausswolff, who stood out on a bill dominated by ambient and drone acts.  Providing a triumphant set accompanied by her magnificent band, von Hausswolff’s powerful voice and organ performance veers in definably proggy territory on occasion, yet that has not stopped her winning plenty of attention.  Village Underground was at its busiest for her set.

Those unfamiliar with the darkness that encompasses so much of Denovali’s musical philosophy were soon left shellshocked when The Haxan Cloak arrived on stage.  Bobby Krlic’s one man post-industrial project has always been atmospheric, and often loud, but this performance saw him in particularly pulverising form.  The sheer force of the kicks was sickening, affirming that Krlic is rapidly approaching Sunn O))) and Swans in the volume charts.  The fact that only around a quarter of those who watched von Hausswolff remained for Krlic's set was unsurprising.  Legendary ambient dub duo Porter Ricks could hardly have hoped for a more comprehensive support performance.  Their watery, distant beats struggled to emerge above sea level during a brief, and sadly rather underwhelming, half hour headline set that was witnessed only by two dozen or so remaining punters.

Cafe OTO was packed by the time the venue’s own digital producer Oli Barrett, aka Petrels, kicked off a shorter second evening’s programme of music.  Barrett, providing electronics, was not alone.  He was joined by both a drummer and guitarist, who injected some extra intensity.  Recent LPs Onkalo and Mima have both been huge steps up for this project and Denovali will be hoping that Barrett provides more excellence for them to release in the near future.  Origamibiro came next, their meditative post-folk ambience being accentuated by some delightful live visuals that made use of weighty tomes and a typewriter in equal measure.

Piano Interrupted were greeted as if performing a headline show, with every track enthusiastically applauded.  The band’s jaunty, jazz-inflected approach made a refreshing change to a bill that was mostly slow and brooding, although some tracks in their repertoire seem to be a lot more engaging than others.  Thomas Köner, looking a lot more content than during the Porter Ricks set the previous evening, neglected track divisions in favour of a solid wall of ominous noise.  Disorientating more than disarming, Köner’s status as one of the world’s top current sound artists made him the perfect choice to close such an esoteric festival, one that I hope much returns to London in 2015.