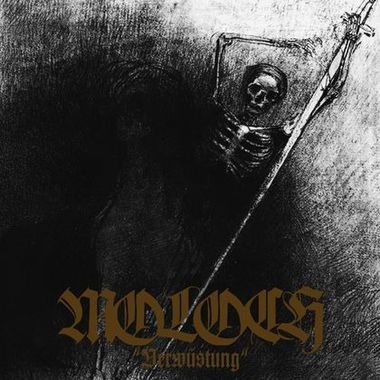 DSBM is really the bane of my existence. I'm having a rough couple of weeks, stressed from moving into a new house, trying to finish up my degree, and working non-stop; I picked this album to review. I was putting off listening to this album because I am so busy with life, but it was always there, sitting in my queue of things to do.

So finally in the mess of what is now my life, I have a little free time in between my internet getting cut off and picking up my moving truck tomorrow to listen to this album. All I can say is....really?! As I finish a cool pint of Lone Star - aka the National Beer of Texas- and listen to this album all I can think is how it really is complementing the chaos which is all around me.

Moloch, a Ukrainian one man act, has put so much material out since 2004. While most are recordings mostly made for inner circles to hear, they are leaked into various formats for purchase. Pr. Sergiy Fjordsson, the man behind the sound has performed in various noise/black metal projects. In various articles I researched on the internet, his main medium is vinyl. I really respect an artist who stays true to a sound and type of recording which he thinks represents him well. Fjordsson is one of those guys who doesn't like to deviate. While Verwüstung is available on CD, I am sure to get the atmosphere Fjordsson wants you to experience you will have to break out the old record player.

All tracks, I read from Moloch's website, are sung in Fjordsson's native Ukrainian language, but the titles are in German. The opening track 'Todesstille' is foreboding, remnant of an old horror movie soundtrack. The album then bursts into raw cold fury. Like an ancient undead army marching through a howling storm, this album is the definition of black metal. The analog sound, the haunting soundscapes, the harsh raw vocals, the running double bass. Fjordsson's sound is a kvlt as it gets.

I really can't say more about this album then you really need to listen to it. I really would recommend this to anyone as a top black metal album which has come out to date. It is a low dying sun, it is a cold wind, it is a haunting darkness.

For the fans of the old school, for the fans of when black metal was sacred and ritualistic. Get this album, nay, get the vinyl! Put on your corpse paint, light the candelabra, and crank it up. You are going to scare the neighbors and likely see Satan himself. This album rules, hard.