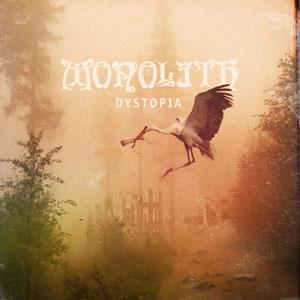 Out on April 11th through

Monolith are a band from Bremen, Germany that have been around for about three years and this is their debut album Dystopia, which consists of seven tracks of old school doom/rock hailing from the 70's with slow and heavy explosive psychedelic riffs.

There really is no getting away from the fact that this is one for the Ozzy Sabbath fans. The vocals alone would be enough, even down to the "alright now" on ‘Won’t Come Down’ or “oh yeah” on ‘Rainbow’ to get you thinking of the old guys of rock but there is also a guitar style that is very reminiscent of Iommi. Ok, I may as well throw in Geezer and Ward as well because the heavy bass and drums just add to the Sabbath sound.

Having said that, Monolith aren’t a Sabbath tribute band though. They do have enough of a modern doom feel to pull off a good album with some excellent tracks. One of these is ‘Rainbow’, five minutes in and you are hit with slow doom and excellent psychedelic guitar running from speaker to speaker which I will get to later.

Dystopia starts with ‘Won't Come Down’, a heavy opening track that will get the head and feet going and this groove continues through most of the album, which does make it a bit tricky to write about. Basically, if you like track one then the next six tracks are on par, if not a bit better.

That improvement comes in the form of some brilliant guitar in the middle of ‘Dystopia’, with the first taste of real psychedelic guitar and low-end bass that will leave you wanting more.

There is a nice stoner riff in ‘Sleepless Eye’ and again has a Sabbath groove middle section that is nicely executed but I think the best track is ‘Rainbow’, which is the longest song and one that would go down well live. You could easily lose yourself in the doom tempo and wailing guitar in the middle section of this track, which could also benefit by being a bit longer.

Every song on Dystopia was recorded live with vocals and some guitar overdubs added later in the studio. The reason for this was to give the album a more raw 70’s style atmosphere; not sure I picked up on that but the vocals are some of the most consistent that I have heard in a while.

Over all a very good album that will have some people reminiscing and some younger listeners hopefully looking back and thinking yeah I could get into that old school sound.

Monolith plan to release Dystopia on the 11th of April and there is also a gig planned for that date in Bremen's club Römer to celebrate the release. Also on the band list is Eta Lux and Black Jesus. Hope they have a great night.