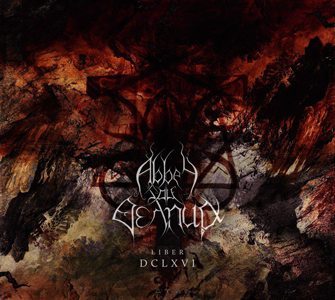 I am all about black metal bands going new directions. I am also about clever descriptions which don’t fall in the norms of labeling music genres. So I was all for giving a listen to Liber DCLXI; however I became a little timid into writing the review for it. Usually when I first listen to an album I can tell by the first track if the tone of the album will be great or just awful. Abbey ov Thelema, was hard to judge.

Abbey ov Thelema is a side project of two members (Delgrast and Vilosof) of Nevaloth, an atmospheric black metal band from Slovakia. They describe their sound as “Transcendental Khaoblack Metal” and their second full length, Liber DCLXVI, which is a good phrasing on what it does sound like. Chaotic, disarrayed, dark, and symphonic. Liber DCLXVI, I would describe as the dark mazed dissonance of a thousand grim bards playing over the screams of hell.

Liber DCLXVI is an album not for the casual black metal listener or for any black metal listener at all. This album is for a listener who is into a chaotic avant-garde, appreciates musical flexibility, or is into breaking boundaries with a juxtapose of black metal vocals, orchestra instruments, electronic keyboard tones, and blast beat drums. Some of the tracks, for example 'De Ascensione Impeii Peccati', break into traditional black metal stylings but only for a few minutes. Other tracks are best described as musical chaos, with rapid time changes, genre mixing into symphonic to electronic arrangements, and vocals ranging from raspy black metal screams to an almost howling death metal grunts. The tracks average past the 8 minute mark and in those minutes you get a lot of music packed into your ears, even at some points getting a little dance drum and bass-line.

Again, this album is not for that average black metal listener. I was really confused on this album, with its erratic changes and melodies. Abbey ov Thelema goes to places black metal might not really be thought to taken while still keeping the elements of black metal. I really applaud their bringing new elements to the genre; however, it might just take some time for the listener to grasp the elements they are presenting. Recommend you listen to this album a couple of times, let the base elements of what Abbey ov Thelema are, then decide if you are now into their “Transcendental Khaoblack Metal”.