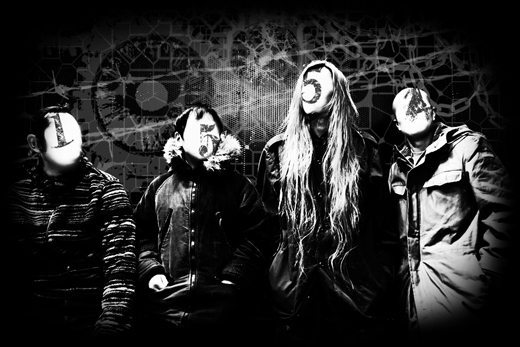 By Phil Kaberry and Yoshi Fukae

Chaotic, intense, and unrelentingly brutal, veteran hardcore act STUBBORN FATHER has bludgeoned its way to the forefront of the Japanese underground scene with frenetic live performances and consistently inventive musicianship. “They’re the best thing happening in Japanese hardcore at the moment,” says Harada, manager at Osaka’s M4 studios where the band rehearses. Echoes & Dust caught up with longhaired, soft-spoken frontman Shige Born in the third-floor studio in Umeda’s teeming red-light district. Fingers of tobacco smoke climb up the postered walls as the singer digs in his bag for a cellophane-wrapped cassette—the group’s latest release, a compilation encompassing their best output to date.

“Stubborn Father formed in 1999,” says Born. “It’s been 16 years. I've been into music since I was a kid and I formed a few different bands, but I couldn't find friends who it really clicked with for a long time. Finally I met and became friends with Fukusuke [guitar]. He said he’d been in a band before, so we went to the studio and just hit it off. We started to make songs together as we looked for other members. That was the start of Stubborn Father.”

(((o))): How would you describe STUBBORN FATHER to someone who hasn’t heard you before?

We are basically a hardcore band. It's difficult to describe in one word. I think the music is full of stark emotion; it’s chaotic, but it’s a lyrical sound. In a scene with so many finely distinguished sub-genres, I guess you’d call us "chaotic hardcore".

(((o))): Are there any tracks that you’re most proud of on your latest record? What direction do you think the music will take in the future?

"Juuninichi me no Fumoto" is the one I’m most proud of. It felt like we reached a frontier leading to our next evolution with that song. Ryan, founder of the Meatcube label, asked us to record a “discography mixtape” to release on his label. I’d never thought about it and we had no plans to release a discography tape, but he was so passionate about it that we agreed straight away. We deeply appreciate Ryan producing such great stuff. And it’s been a turning point. It’s revitalized us. I don’t think our basic sound will change dramatically, but I think it will evolve naturally as we progress.

(((o))): What bands have influenced your sound?

I guess SWARRRM or Envy. We used to listen to them when we started performing as STUBBORN FATHER. And our ex-label mate ANODE. They were a big influence because they're Japanese bands and we could experience them live. And also Shikari. They are all completely original. They had a huge impact on us. But we’re inspired to make totally original music mainly because the guys have a lot of originality. Other than hardcore, I also like electronica, noise, and ambient music. That kind of music has a very different set of rules and methodology. I try to extract its essence and pass it through my own filter, and apply it to our sound. And the other thing we try to do is infuse the flavor of Japan into the songs. We’re a Japanese band. I think it's essential that the melody and style of singing have that unique flavor.

(((o))): The way bands gig and record is different in Japan. Do you think it is easier or harder for a band in Japan compared to overseas?

Unfortunately I don't really know about the way bands do things abroad. I think it's difficult to compare because the situation is so different in every country. We we’re talking about music with a musician from Chile who was interviewing us for a fanzine. The guy said he was envious of Japanese bands because we have a lot of fully setup live venues and rehearsal studios, whereas in Chile bands have to transport, load in, and set up all their own equipment when playing live. Actually I saw their video and this band had to assemble the wooden stage by hand. Compared to that, I’m sure Japan is an easier place to perform.

(((o))): Do you feel any frustration about the dominance of commercial music in Japan? Do you think there is any pressure for groups to change their sound or image to become commercially successful?

I feel no frustration at all. I think commercial rock couldn't exist without underground music, and vice versa. Commercial acts play the music that they do because they like it, and also the big-label environment and that way of doing things convinces them. We believe in the environment of the underground music scene, so that’s how it is. Major label managers only invest in music that makes a lot of money. And in Japan, that music is pop music. That's it. Also I think another reason is that rich people can't really understand true music, art, and sub-cultures in Japan. On the other hand, our lack of energy and interest could be to blame.

(((o))): Which bands do you most like touring or gigging with?

I'd like to tour with Seek. I really get those guys. There are so many exciting bands, but if I'm forced to choose, I’d say Seek, TRIKORONA , ANCHOR, SWARRRM, weepray, SHIKABANE, and PROTESS. Each of them has outstanding originality and they inspire me so much.

(((o))): What are you listening to now that is blowing your mind?

TETLA93, a Japanese band and ex-Meatcube label mate who unfortunately broke up. Their first and last records are awesome and they completely blow my mind! The first gig I ever went to of theirs impacted me in a way I haven’t felt for so long. I am really sorry they disbanded. I actually did some guest vocals on one of their records. I strongly recommend checking them out.

(((o))): Do you think Japanese hardcore has a unique character?

Yes. Don't know about all Japanese hardcore though, but I think the bands around our scene are unique. Most of their songs are high quality, and I get a sense of delicacy in their music. The melodies and Japanese lyrics are distinctive and have a unique feel.

(((o))): What most inspires you when you’re writing lyrics?

My own daily life. In many cases, I write about my feelings or about something I'm interested in. Sometimes I use a metaphor to express the idea in another situation or scene; sometimes I take a different point of view. I try to use absurd contexts and wordplay. It's important to describe situations with real and familiar words.

(((o))): What is most satisfying about playing with this band?

When we exceed our limits live, and when I get our finished records. It's always a joy to finish hard recording work and hold the record in your hands. I'm sure every musician feels the same satisfaction in that moment.

(((o))): What are your plans for the next album? What direction is your sound heading in?

Recently we’ve had a lot of offers to make split records, so after finishing those, I'd like to start making our third EP or first full-length album. I guess that will take about two years. For the next record, the direction hasn't been decided yet. I'd like to mix everything that I like to do and make a kind of grand sum. Like we've done on last record, I'd like to make it good quality but with the feeling of a live performance. We’re also planning to invite some guest musicians.

I used to hang out often with Fukusuke [guitar] and Morishita [bass] as well as playing music together. They’re old friends. But after having our own families, it’s become a once-in-a-blue-moon thing. We still get together with Camel [drums] to go see a show or visit each other’s homes. Where we drink. A lot.

Meatcube is a great American label that’s introducing a lot of Japanese bands to people overseas. We are grateful for their help. Ryan is passionate guy and knows more about Japanese music than Japanese people. I'm really looking forward to meeting the amazing guy someday. We've also got an offer from America that we're negotiating. We’ve actually had a few different offers to tour abroad but because of bad timing or whatever, never done been able to do it. We'd like to go to the UK or any other countries if there’s any offers. I'd like to get our music out there as much as possible!