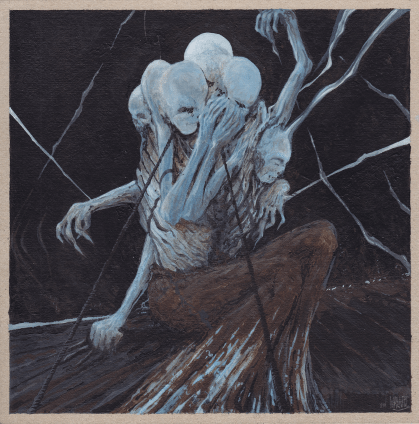 Abaddon Incarnate’s Pessimist was released a little over a month ago on Candlelight Records. Based out of Dublin, Ireland, this death-metal-turned-grindcore band is one of the hardest hitting mobs to rain down the heavy on our heads. I slept on this album for a month. That was a huge mistake. Pessimist is a lo-fi, gritty, black grindcore album that really hit home for me.

If you’re familiar with Brutal Truth or Napalm Death you’ll know exactly what you’re walking into, musically. The guitars are thick and crusty, the bass is thundering, and the blast beats are all that you want them to be. Bill Whelan and Steve Maher one-two punch of high and low vocals are nothing short of vicious. The pair also shares guitar duties, with Steve Finnerty on bass Johnny King on drums. King’s drumming is standout with tracks like ‘Yester Hara’ showing off his impressive speed.

Abaddon Incarnate mixes it up in interesting ways. Both the title track and ‘Morbid Epiphany’ have slick guitar solos that aren’t typical of the genre. The band likes dynamics. The first three tracks hammer you about the head and neck, and then ‘Broken Sceptre’ comes in with a mournful guitar lead. It fits, but it’s not what you would expect after the opening sonic assault. ‘Fear’ is almost four minutes long and hails back to their earlier death metal days. In addition to nice solo, ‘Morbid Epiphany’ has a solid, head-bobbing groove.

The album art is sick. It’s dark and brooding and is one of those rare occasions where the cover art leaves you feeling exactly as the album does. Steve Maher’s lyrics have focused heavily on the occult and satanic darkness in the past, but he’s moved on to more human feelings for this release. Depression, loneliness, and dark, evil thoughts fill his mouth. He posted a long diatribe in February, revealing his thoughts and giving us a glimpse behind the scenes of the new album. “Each person adding a shade of darkness to each song and the album as a whole,” he said in the Facebook post. “For a start, the lyrics are a step away from what we've been predominantly dealing with in the past. This time were focusing on depression, alienation, dark thoughts, loneliness, shame and regret. Brought on, I guess from years of alcoholism and living in a very dark place, I get lots of inspiration for an unhealthy album of genuinely bad vibes. It’s going to be a stark brutally honest record.”

They have accomplished what they set out to do and then some.