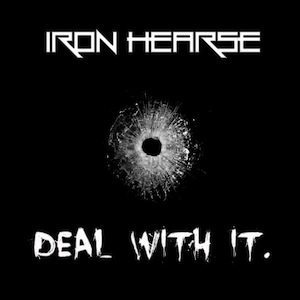 Out Now via Bandcamp

With much happiness, we can welcome back the Iron Hearse boys with their latest album Deal With It. Having first experienced the Hearse back last year, I was anticipating this release for a while. Eager to hear where the band are going next. Would it be a continuation of their last release? Would it be even more sludgier? Would it be even more doomy? In a word - no. It’s better.

From the opening track ‘Deal With It’ it’s clear the Hearse are doing things a little bit differently with a 41 second blast of punk aggression and attitude the album title becomes a little clearer: ‘We’ve progressed. Deal with it’. ‘Cydonia Quest’ continues the pace with an riffs that remind me of Thin Lizzy - heavy yet melodic. Grant’s vocals are much more dynamic on this album too which is a great thing. He’s voice sounding like Zakk Wylde but with much better diction.

‘City of Vanishing Spires’ slows things down to a mid-tempo groove yet there is still an edge to the track. Halfway through a riff appears that has an almost dissonant quality to it that gives the song a queasy feeling; like there is something wrong just under the surface trying to break out. Reinforcing this is the stop start ending..... just when you think it’s safe and gone and you’ve let your guard done it returns to pummel you.

Across this whole album there are nuggets of gold and sparks of genius. ‘Archimedes Death Ray’ is THE concert opener with it’s relentless chugging and bounce, ‘They Beckon From Below’ features a riff that reminds you that it’s not just Kyuss who could combine the tenets of stoner rock with up-tempo pacing. ‘Evil On Your Mind’ is a song that I could not stop nodding my head to - through the whole song. Props to the Hearse for including a CD only track in the form of ‘Burning Love’ too as it’s stylistically the most 180degree from their previous stuff, sounding like Lynyrd Skynyrd crossed with Chuck Berry. In a swamp. It’s brilliant.

This is a fine album to follow Get In The Hearse for many reasons. It sounds better (I complained about the volume of the drums in my last review. Not an issue here!), the energy is higher and it feels like the guys have progressed musically. It would have been easy for them to stay focus on the slower, darker avenues. Instead they’ve clearly mainlined some Red Bull (other stimulants are available) and decided to go for the jugular. I applaud the Hearse for this. It shows a daring and chutzpah to be admired. A great album by a great band: doomy, punky, heavy and groovy. Now stop reading this and go buy the album.