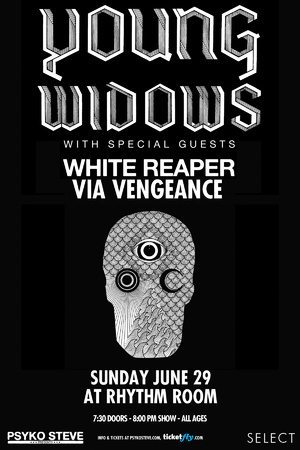 Young Widows impress me on every level possible.  Both sonically and visually, they are unique and they do not appear to be at all interested in what anyone else is doing.  They move forward and don't seem concerned with looking back or resting on any laurels.  Evidenced greatly by the majority of their set being new material from their recent full length, Easy Pain.
The Rhythm Room here in Phoenix is an older and tighter venue than most, but it always sounds pretty damn good in there.  I arrived as the band was wrapping up there sound check, which to be honest, was pretty cool in itself.  Not because of anecdotal banter or anything, but it was just nice to get a sense of what was to come.
Lights dimmed, intro to 'Godman' rings out and like a an anvil to the face, they all come roaring in.  It was fucking awesome!  That last part about it being 'fucking awesome' will come up again.  'Cool Night' and 'Kerosene Girl' would follow and both floored me.  Young Widows' sound is rich and dense and it is not looking for perfection.  It is real and you will feel the difference.
The band played only a few songs from the past, and 'Lean on the Ghost' was one of them.  It is a song that shows what they do so well.  They build tension, erupt and subside so many times and in so many unexpected ways, you are left out of breath, but somehow wanting more of it.
The band came back with more tracks from Easy Pain after the older ones.  Fine by me.  The highlight of the night, though, was 'The Last Young Widow.'  Their performance of was something I will never forget.  Alive and in your face is the way I like to experience music, and I will tell you now that Young Widows are amongst the very best at delivering this.  Go and see Young Widows if you have the opportunity. You wont regret it.  As far as live shows I've seen, this was amongst the very best I have had the pleasure of attending.  I said it earlier, I'll say it again - Young Widows are awesome!  Highly, highly recommended.