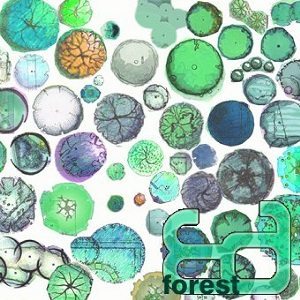 ED is a four piece band from the Siberian city of Barnaul, Russia that has been around since 2012, the year in which they released their first EP. Their music is 100% instrumental and has accurately been described as Post-Rock and Math-Rock but their compositions go beyond these genres as it also has some hints of Progressive and Punk; this mix results in a diverse collection of intricate and well-designed songs.

It’s amazing to hear how these musicians that have been in this band for only 2 years can create such complex and magic music, their technical precision along with the creativeness in their songwriting is remarkable. Clearly they are prodigious musicians but we never hear them showing off or becoming cold and pretentious.

Forest is their debut album; includes 9 songs that for almost 30 minutes take us on an amusing trip through original, honest and magnificent melodies. In these songs ED went straight to the point, they know exactly what they want to express and how they want to do it, therefore, we find short and intense songs. Their sound is humble, warm, genuine and beautiful.

Forest begins with a peaceful 'Intro' in which the guitars create a relaxing soundscape that guides us to 'Tropic', a clear example of how a math-rock song must sound like, the guitars interact with the bass in a perfect way as the drums create a solid background that at some moments sounds like a heartbeat. 'Road' comes with a slower rhythm that has an elegant execution and one of the most fantastic bass lines that I’ve ever heard.

'7' is a little more complex song; its multi-layered guitars change rhythm a couple times during its almost 4 minutes of duration, the incredible talent of ED’s musicians makes all changes flow in a very natural way. 'Africa' takes a more aggressive position, the drums are so powerful and in the middle of the song we find an intense progression that simply blows my mind, as always the guitars and bass are played with an extraordinary musical technique. 'Travolta' is the perfect instrumental song, extremely emotional with the appropriate amount of ups and downs in the melody to keep us hooked to the song.

The final part of the album starts with 'Trains', a Post-Rock song at its finest; the way the guitars melt with the bass and drums is simply wonderful. 'Forest' follows the same pattern but it has a catchier tune and the guitars have a vivid conversation while the rhythm changes a couple times. 'Salamander' is the final track, its Post Rock-ish sound provide the perfect ending to this terrific album.

With forest, ED has proved to be one of the best new bands in the instrumental rock scene of the world; I really hope that they keep creating music for many years.