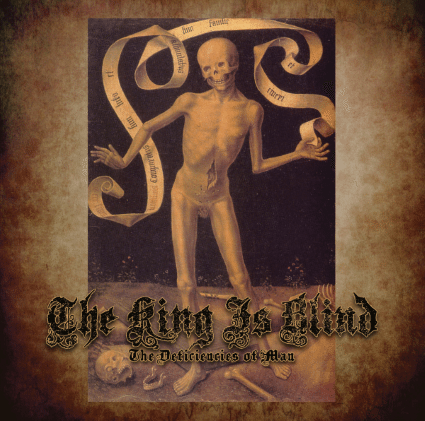 The King Is Blind

Out on September 1st through

For some people The King Is Blind might come from out of nowhere, for others this band is a familiar player on the metal scene already. The band, especially bassist/singer Steve Tovey, actively interacts with people through the fantastic medium of Twitter, and it was Steve who asked me a few months back to check out The King Is Blind’s first release Bleeding the Ascension. This release impressed me in such a way that I was instantly following the band’s path and their new release The Deficiencies of Man was a highly anticipated release for me personally.

The band is relatively young; they came together in 2013 and only released Bleeding the Ascension in March of this year. But the band’s career has taken off like a rocket, with their recent well-received performance on Bloodstock Open Air as the current career highlight. There is plenty of experience in The King Is Blind though, with the members previously making a rattle in bands such as Cradle of Filth, Entwined and Extreme Noise Terror.

So, what about this new release The Deficiencies of Man then? Well, the four tracks on this EP are some of the most exciting tracks in death metal I’ve heard in a while. Opener ‘A Thousand Burning Temples’ starts extremely promising with a salvo of furious blast beats combined with some heavy guitar shredding. Steve Tovey’s vocals are good as well; they accompany the music perfectly, with his growling grunt sounding clearly and actually being quite similar to Karl Willetts's growls on the older Bolt Thrower releases. Talking about the mighty Bolt Thrower, The King Is Blind reminds me a lot of this legendary band, with a similar sounding death metal groove combined with those vocals.

What The King Is Blind do very well though is to bring in lots of variation in their attractive style of death metal. It’s not just all blast beats, double bass drumming and heavy shredding. They incorporate plenty of thrash, groove and heavy metal elements. Listen for example to the fine change from old school death metal to the more thrashy rhythms at around the 2 minutes mark in the opening track ‘A Thousand Burning Temples’, followed by an effortlessly flow into a downbeat metal groove, to then hit you straight back in the face again with those tight blast beats similar to the opening seconds of the track.

The King Is Blind, I salute you. Death metal is by some considered to be a dying genre and by adding various elements to the mix, The Deficiencies of Man is one of the more interesting death metal releases of this year. With Bleeding the Ascension they were knocking gently on the flaming gates of the death metal Kingdom, they now pulverize these gates with The Deficiencies of Man, entering the Kingdom triumphantly. I’m sure this is not the last you’ll hear of The King Is Blind as I predict a successful future for these guys!