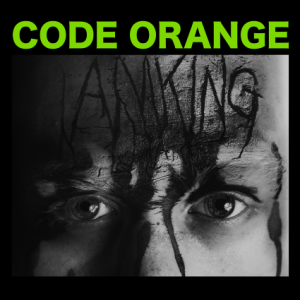 Released on September 2, 2014 via Deathwish Inc

Code Orange, previously Code Orange Kids, have quickly made a name for themselves by taking the conventions and merits of hardcore and tearing them to shreds, then reshaping the pieces into something much heavier and poignant. The band’s new album, I Am King, finds the group ingesting even more genres, and spitting something even more substantial and brutal back in the listener’s face.

Code Orange’s first album, Love is Love//Return To Dust, was a fantastic, gritty reinterpretation of hardcore. I Am King pushes further into the boundaries of metalcore, and a proprietary blend of heavy elements unique to Code Orange themselves. What the band is good at, in particular, is channeling the youthful aggression that metalcore often advertises, but never quite delivers on. The three part punch of screams, deadpan singing and otherwise deranged vocals makes the hostility much more real, paired with the relentlessly heavy instrumentation.

On I Am King, the band unashamedly takes their heaviest elements and makes them even heavier. The chugging, pit-ready breakdowns are longer and heavier than most hardcore breakdowns, but the band commits so much to bringing the pain that you actually feel like they’re out to cause physical anguish.

The album’s heaviest moments are on the middle track, ‘My World’. The track enters with doom metal worthy chugging guitars, only to lead into even lower tempo guitar work. What makes I Am King truly work is evident here as well. The guitar and drum progressions are heavy and repetitive, but Code Orange inject just enough variation into their songs that they never get boring. You never really know what’s coming for you next, even after multiple listens.

Kurt Ballou, who apparently has the technology to be a multitude of places at once, produced I Am King at his own God City Studios. Ballou expertly produced Code Orange on this album, as he has already done this year with the likes of Trap Them and Every Time I Die. Ballou’s work as a producer is evident because it is not entirely recognizable. The only thing that seems apparent when Ballou produces a record is that a band simply sound more like themselves. And on I Am King, Code Orange further develops into the beautiful yet grotesque beast that they are becoming.

Code Orange’s I Am King feels like being trapped in the jaws of rabid dog. The band is dismissive of any apprehensions the listener may have about heavy music, and simply proceeds to toss them back and forth with their teeth. I Am King is a relentlessly gritty, heavy and affecting piece of music. You only have to hope that you make it out of the experience alive.