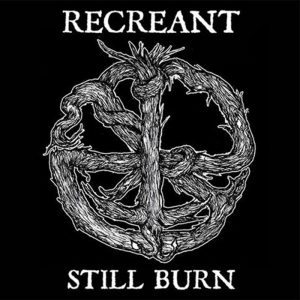 Released on September 2, 2014 via Halo of Flies

Yesterday I was just thinking, “There needs to be more post-hardcore/screamo bands.” I miss that time in the nineties when there where genres of music hidden and rare. I like that it is coming back, aggressive yet melodic, guitars and dangerous vocals that trigger your mind to think.

Tampa, Florida punk band Recreant does just that. Still Burn, their third album, is a mix of great lyrical themes and strong musical presence. Waves of melody from euphoric to violent is laden though out this album. Lyrics cover the anger over rape culture and treatment of mental health issues.

Still Burn is an album of anger, it is an album of change. It is an album, which I think, needs to happen often. Recreant’s music is dangerous. It brings the need to change the way the listener thinks, it brings an emotion of revolution. Songs like ‘United States of Stubenville’ brings to light the culture, which young women, held to a standard, that due to their actions or dress are, responsible the actions for others. ‘Silent Plague, Secret Trauma’ the ideas of image. Society’s idea to look a certain way, to make you feel ashamed you are not “the right weight” or “the right height.”

This album is really well produced, the songs are well written and really bring the point across of what the lyrical themes are about. This album is what punk is about. Strong lyrics with powerful meanings, angry abrasive guitar hooks, violin pieces which bring more raw emotion, weave together in solidified realm of dissatisfaction against a broken system.

Still Burn is a great album. I really appreciate this style of punk rock. Punk rock which still is the voice of a revolution.