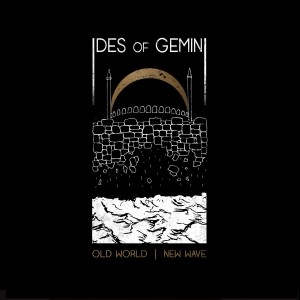 Released on September 15, 2014 via Neurot Recordings

Ides Of Gemini draw from many disparate styles, from doom to black metal to goth, melding elements of each into a sound that doesn’t quite belong under any one of those banners. They operate entirely removed from any genre constrictions, and any similarities to existing signifiers are more in terms of atmosphere than any sort of definable musical or vocal comparison. Their latest collection of uniquely mysterious, minimalist songs, Old World New Wave, builds on the template laid down on earlier recordings The Disruption Writ and Constantinople, whilst also displaying a new-found willingness to, if you’ll pardon the cringe-worthy turn of phrase, actually rock.

This is no more evident than on opening track ‘Black Door’, which storms out of the gate with a beast of a riff courtesy of guitarist J Bennett. With a swagger not previously heard in his playing, it calls to mind the enormous stylistic leap between The Cult’s Love and Electric records, and while I don’t quite see Ides Of Gemini prancing around stadiums in tasseled Harley Davidson leathers quite yet, it’s still somewhat of a departure. Sera Timm’s voice soon confirms that you’re definitely listening to the same band, her uniquely haunting timbre is so immediately recognisable, and without a doubt the defining characteristic of the band. Drummer Kelly Johnston-Gibson has also developed a more texture rhythmic sensibility beyond the sparse snare hits of previous records. This is the sound of a band now confident enough in what they do to simply let loose and play.

‘The Chalice & The Blade’ sees the band take things back to more familiar territory, with a buzzing black riff, economical repeating rhythm, and vocals firmly at the fore. Bennett has expressed this as his intention in the past, that his songwriting is merely a vehicle for Timm’s voice, and this approach is definitely necessary when dealing with such a unique talent. From her work with erstwhile atavistic soundscapers Black Math Horseman, to the shimmering elegance of her recent Black Mare solo recordings, Timm’s singing is an instrument unto itself, yet she is able to meld it effortlessly with a variety of songwriting styles. That each of these projects is quite varied from the others, yet all share a certain atmosphere, an otherworldliness, is testament to her vocal prowess.

Things ramp up again on ‘Seer Of Circassia’, a stomper of a track with some emotive playing from Bennett, and plenty of gigantic cymbal crashes from Johnston-Gibson. ‘White Hart’ veers towards the doomed end of the spectrum, a lugubrious trawl through the depths, with Simms’ regal delivery a particularly heartbreaking highlight.

A highlight of the whole record is the stately ‘May 22, 1453’, which displays a level of dynamism sometimes lacking in the songwriting, with each individual element given plenty of space to breathe, whilst still feeling part of a cohesive whole. Timm’s remorseful cries are counterpointed by Bennett’s tasteful, emotional solos, the whole thing underpinned by steady rhythmic ebb and flow courtesy of Johnston-Gibson.

Conversely, ‘The Adversary’ fails to maintain that momentum, sounding a little too similar to their previous track ‘Resurrectionists’, which has already seen two recorded versions, with only a mournful solo from Bennett serving to break up the aridity. The fantasically-titled ‘Fememorde’, named for a series of assassinations carried out by the far-right in Weimer-era Germany, is an altogether too brief sojourn back into riff territory, with guitars and drums locked in step alongside a typically enigmatic vocal performance.

Strangely, considering some of the genres which Ides Of Gemini take their cues from, the track lengths on Old World New Wave rarely stretch further than the four minute mark, and while brevity is an admirable trait all too often lacking in the darker musical genres, it leaves some tracks feeling like mere sketches, as opposed to fully realised songs. This is all too apparent in the closing duo of ‘Valediction’ and ‘Scimitar’. While these are not the best tracks on the record, perhaps given a little more time to develop, they could have ended the album with something truly majestic. As it stands, both tracks feel unnaturally curtailed.

As a continuation of their inimitable sound, Old World New Wave is an admirable step forward, incorporating new ideas executed with a new-found confidence of songwriting from Bennett. However, they’re far from the peak of their powers yet, but with time Ides Of Gemini could yet record something as fully realised and timeless as Sera Timms’ already has with Black Math Horseman’s Wyllt.