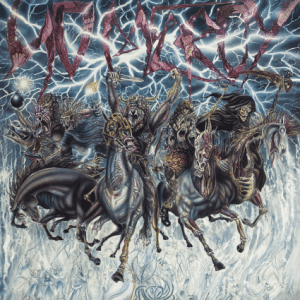 Released on October 28, 2014 via Superball Music

Sometimes you’ve got to relive the past in order to travel into the future. So with the ever growing technicality of mainstream metal these days and bands constantly finding it necessary to push the boundaries ever further, the re-release of  Californian thrash metallers No Mercy’s one and only album couldn’t be timelier.

Widespread Bloodshed (Love Runs Red) was first released in 1987. Thrash metal was moving forward in leaps and bounds at this time thanks to the “Big Four” and the myriad of local bands who were taking the style and refining it and redefining it. Enter, No Mercy. The brainchild of Suicidal Tendencies guitarist Mike Clark and lead singer Mike Muir, No Mercy was no holds barred thrash metal. If modern bands want a good look at how it was done but wanted to avoid the mainstream metal boys then the re-release of No Mercy’s one and only album has thrash metal 101 written all over it.

There is nothing ground breaking here. There is nothing mind blowing. But there is solidly awesome, good old school thrash metal tunes from start to end. From the cliched 80’s sample intro of ‘We’re Evil’ to the thumping bass drum start to album closer ‘Waking the Dead’, I literally found myself grinning from ear to ear, nodding like a freaky car dashboard toy and fist pumping like a lunatic. This is nine tunes of flawless thrash metal. And while not as edgy as Muir’s up and coming crossover band, Suicidal Tendencies the album was a great release and only helped to showcase Mike Clark’s riff heavy guitar playing and exhibited Mike Muir’s ability to vocally rock with the best of them. His voice was very akin to Lemmy in his prime (which is never a bad thing) and married up with all nine riff driven, metal tunes perfectly.

As bands with extended range guitars, poly rhythms and singers who either (let’s face it) sound like chicks or sound like they’re throwing up are dominating the metal charts these days, it’s a good time to check back with the old school and see that it truly doesn’t take much to make a great thrash album.