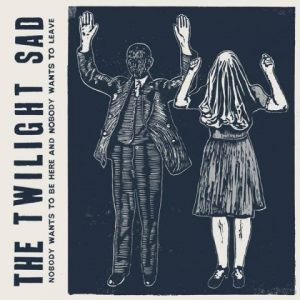 It’s dark outside as I write this, and I’ve not even had my tea yet. The heating is on and if I turn the stereo down I can hear the wind whipping between the buildings on my street. The clocks will change soon. Must be time for an album from The Twilight Sad.

Since the band’s arrived in 2007 (really, 2007? Jesus), they have progressed with each release, the sound maturing, getting heavier, then more electronic; there’s been experiments with strings, with acoustics, tracks have been reworked for EPs, collaborations aplenty have ensured they always seem to busy, with everything always rooted to James Graham’s coarse vocals and Andy McFarlane’s progressive guitar work.

And now winter is coming and they’re back with their fourth album – one produced at Mogwai’s Castle Of Doom studio, engineered by live soundman Andrew Bush, mixed by Peter Katis (The National, Frightened Rabbit), and one which dispenses with some of synth-platforms that underpinned 2012’s ‘No One Can Ever Know’. In its place come waves of guitar, at points returning to the more shoegazing / post-rock sound of the band’s earlier releases, in others becoming almost new wave in punchy, reverb drenched chord progressions. It’s perhaps unsurprising the band recorded in Glasgow, where it all began for them.

Andy McFarlane’s haunting guitar kicks off proceedings on ‘There’s a Girl in the Corner’ but it’s the deep keyboards that really give the track its power. ‘You’re not coming back, you’re not coming back from this,’ sings a reassuringly sinister James Graham – his voice as powerful a weapon as it ever has been.

In ‘Last January’ and ‘It Was Never the Same’ the band have released two of their most approachable songs, the latter being one of the best things they’ve ever recorded. Catchy melodies and memorable choruses work on both, but with a rounder, smoother sound that we’re used to from the band. Even the dark themes that have permeated Graham’s lyrics seem lighter. The extended coda seeps into your consciousness. It would have been a strong closer such is its resonance.

Despite this occasional softness (relatively speaking), Graham’s lyrics for the most part are as dark and opaque as ever and repeated listens can be spent decoding the subtext. This is reinforced through song titles like ‘Drown So I can Watch (a slow-paced number with rumbling bass and chilling lyrics) and ‘Pills I Swallow’.

Common themes of a haunted childhood and failed relationships appear throughout. ‘Put your toys away / tried to remember your face / left with the dogs again / she’s in the back again,’ sings Graham on ‘I Could Give You All That You Want’.

One of the album’s highlights, ‘In Nowheres’, marks a bit of a departure with huge, heavy guitars, the vocal buried lower into the mix and thumping cymbals throughout. In these phases of the album the band reveal their skills as exponents of post-rock. At 5.25, this is the longest track on the album, but it could have been drawn out, the complexity of its layers broken down and given space. There is a consistency in the band’s approach though – each track feels like part of a whole piece of music, from the more melodic to the amazing electronic shoegaze of the title track.

That the band’s success in the UK has  never been more pronounced has always puzzled me. With ‘Nobody Wants To Be Here And Nobody Wants To Leave’, The Twilight Sad are not exactly going to be snapped up for Saturday tea-time telly, but there’s no doubt this album is at more of the commercial end of their output. Whether this is deliberate (I doubt it) or simply the direction the band have chosen to move in is irrelevant. Twilight Sad sound like a band who know exactly what they want to achieve and have confidence and ability to spare in making that happen.