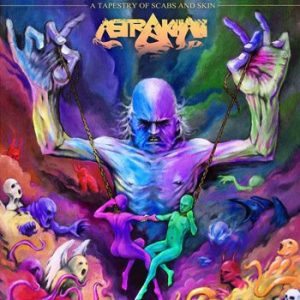 Released on December 12, 2014 via War on Music Records

My least favourite aspect of some heavier music is the use of the guttural, cookie monster vocals, which are popular within some types of metal. After a few tracks I find the vocals to be stifling and redundant, not menacing like they are intended to be. So I find it refreshing to find metal bands that dare make songs you can understand the lyrics in. Yes, it is possible to have both intense and comprehensible lyrics. So I was intrigued when I heard Vancouver based metal band Astrakhan.

I think the brilliant album cover art by Nick Patterson gives you an indication about what you’ll find inside Astrakhan’s four song EP A Tapestry of Scabs and Skin. The cover depicts a foreboding wraith-like figure controlling smaller chained figures as demons and specters ooze from the murky edges of the cover art. It has a bit of a Too Dark Park vibe. Overall the impression is dark and eerie but there are vivid and bold hues as well. Like the cover art, the music is equally ominous with undercurrents of mysterious sonic colours.

The Canadian rockers’ EP begins with ‘Cupid’s Fist’. You’ll take notice of the dual vocal attack shared by Bassist Dustan Toth and Guitarist Rob Zawistowski which gives the track a dynamic shifting energy. The music focuses on striking melodies, strong pulsating rhythms and ample servings of heavy chugging riffs. The aural balance is captivating, if not astonishing for such a young band. The crisp musicianship often capably reaching into tasty progressive metal territory. The next track ‘Blinded by the Diamond Planet’ is a smorgasbord of changing tempos and industrious musical composition. The band shows their chops at slow, medium and fast speeds. With such undulating tempos the drumming has to be good to maintain continuity; and Jerome Brewer repeatedly rises to the task. His omnipresent and thunderous pummeling consistently keeps the songs on course throughout the various intricate sonic onslaughts.

You’ll find no respite on the next track ‘Rest in Depths’. The song strikes with waves of satisfying aggressive guitar by Young and Zawistowski as Toth and Brewer anchor the track with deep toned vibrant clamouring textures. The EP ends with ‘The Pillarist’ unleashing more melodic fury. The track is a methodical journey that rises into a few climatic flurries of crushing metallic power.

As the EP ended I was left wanting more. It was as if someone took away my Thanksgiving dinner before I touched the stuffing.

Astrakhan’s EP A Tapestry of Scabs and Skin certainly impresses. The EP is a collection of well crafted, rewarding songs that showcase some phenomenal melodies, thoughtful musical structures and pounding sonic passages. The ability of Astrakhan to create such urgent infectious grooves bodes well for these fledgling rockers. Metal fans give this lush Tapestry a listen!

Note: The bandcamp player has two of the four songs on A Tapestry of Scabs and Skin which were previously released on The Pillarist EP. Be sure to check out the band’s debut EP which is Name Your Price on Bandcamp.