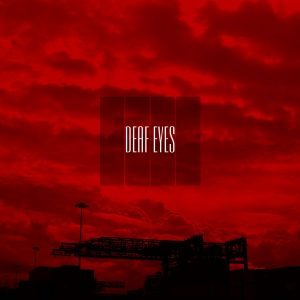 Released on November 10, 2014 via Argonauta Records

Deaf Eyes are a side project of the brilliantly named Incoming Cerebral Overdrive and this is a review of their self-titled debut album released through Argonauta Records. Deaf Eyes are an instrumental band consisting of four members, Pappa, Ale, Ripi and Ste. The self-titled album was recorded at Ampire studio, Pistoia in Italy by Stefano Tocci and Deaf Eyes.

Being filed under post-rock in the press release and with the usual recommended for fans of, one band and description stood out more than the rest. That band was Goblin and the description was a heavy version of Goblin. If you are not aware of Goblin listen to Suspiria on the 31st of October, seventies horror at its best but not similar to Deaf Eyes. So, where does this similarity come in? For me it would be the second track ‘Zombi’ from the Soundtrack to Dawn of the Dead.

I did say Deaf Eyes were heavier, but there is a determination to that track, banging away to make you take notice and the overall album by Deaf Eyes is full of this determination. Described as monolithic this is not one slab of stone but one gigantic piece of rock, sculptured with the same precision as the marble Byzantine columns.

From the first note of ‘Black Canvas’ to the last note of ‘Commiserate’ you know what you are going to get. Basically a bombardment of heavy rock riffs, banging bass and thumping rolling drums with only the vaguest of breaks. To say this band is tight is an understatement. Deaf Eyes are as tight as a pair of bum cheeks waiting for an episode of diarrhoea.

Sandwiched between the above two tracks are another six that all follow the same pattern with the exception of two that stand out as the best on the album. The first is the ‘The Eyes of Regret’, an epic track that really brings out the heavier Goblin sound. The fact that I can see people being chased by a hoard of zombies while listening to this may explain the Dawn of the Dead link. Also there is a scream that is either a guitar or vocal about three minutes in, which just sends this track into orbit. ‘Draining Sun’ is the next track and with its being chased tempo, compliments ‘The Eyes of Regret’ perfectly. I’m sure the band has a completely different concept to this album’s story, but even the album cover has a collapsed industrial look about it with a menacing blood red sky.

The most pleasant thing about this album is that not once did Deaf Eyes move into the speed rock mode. They are hard and their tempo is fast but every track is played with the same amount of gusto. You could be excused for feeling exhausted after listening to all eight tracks, it really can be that intense but I feel it’s worth every note. If they can play to this standard live it would be one gig that will leave you thinking WTF just happened. I’ll look forward to that.