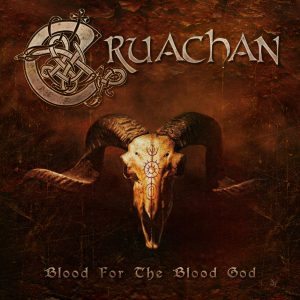 Released on December 5, 2014 via Trollzorn

Blood for the Blood God is the seventh album by Dublin based Celtic Metal band Cruachan. It’s the second album of their Blood trilogy, following on from 2011’s Blood for the Black Robe, which saw a welcome return to their black metal roots. Cruachan is a band that have been making albums since the 90s and have always been passionate about their Celtic pagan heritage. Mixing traditional Irish folk music with a variety of metal styles.

Album intro ‘Crom Cruach’ is a brooding acoustic number with mandolin and violin to set the atmosphere for what is about to happen, which is ‘Blood for the Blood God’, a song that comes crashing in with a riff that we can only call a black metal reel. A galloping rhythm to lead into shouting clean vocals then into a familiar black metal scream. The middle eight shows off the bands intricated folk element next to a driving riff. ‘The Arrival of The Fir Bolg’ introduces the classic folk metal sound with a electric jig complete with violin, mandolin and whistle. This song has a much more lively and aggressive sound to the last. It’s a much heavier sound with crashing double bass drums. The lyrics talks of some invasion from people in boats. A little research tells me that The Fir Bolg are one of the races that inhabited ancient Ireland. You learn something new everyday! The song contains a great gang vocal and thrash guitars.

‘Beren and Luthien’ tells the classic J.R.R Tolkien tale of adventure and love between man and elf. The song is sung in a story teller type style. It’s a metal song that doesn’t take on any folk elements, however it does contain a cool bass break down into pounding black metal. ‘The Marching Song of Fiach McHugh’ is a traditional Irish folk song played in a metal style. Rather than metal played with folk elements; this song has a brighter contrast from the previous tracks. It starts with a rustic tenor fiddle jig complete with bodhran and whistle. It’s also sung with traditional folk vocals. Next come blasting through is ‘Prophecy’. It’s a heavy hectic black metal affair with disjointed fiddle. The middle eight is particularly aggressive, which is good to hear after such a singalong tune as the previous track. ‘Gae Bolga’ is a instrumental track that boasts the band’s talents. It begins in a traditoinal style with acoustic instrumentation then come crashing in the big metal sound. I can imagine this being an awesome live track to get the crowd moving.

‘The Sea Queen of Connaugh’ is definitely a stand out track on this album. Starting off with a driving but hooky acoustic guitar and whistle, it bursts into an Irish folk metal riff  with continued black metal speed. Ready to tell the tale of ‘Grace O’Malley the Pirate Queen’. We find out that Grace was some proper hard-arse beauty but was in fact ‘a British babe’. The song contains some great fiddle breakdowns with a bit  of piano to give atmosphere and Skyclad-eque gang vocals. Next track ‘Born for War (The Rise of Brian Boru)’ keeps up the quality, with chugging verse and vocals, which are surprisingly reminiscent of Pantera; mixed with melodic folk metal which gives a furiest sound. Then a breakdown that is like a metal Fairport Convention, which is most enjoyable.

Reaching the penultimate tracks of the album ‘Perversion, Corruption and Sanctity – Part 1 and Part 2’. Things turn more serious with some pure black metal anger with energetic folk arrangements. Part 1, if I’m not mistaken, is a song that talks about rape and  protecting our children from peodiphiles. It seems a very dark and difficult subject to tackle after the elves and pirate queens. However, musically the song is excellent. Part 2 is a instrumental that gives an epic ending. The album end with a song called ‘Pagan’ which a jaughty number the talks about the suppression of paganism by Christianity with a theatrical female vocal.

Overall I think Blood for the Blood God has some excellent moments of raw heaviness and musicianship, but it loses momentum by the shear length of the album. If only they just included the really great tracks, it would be a better album. Also the massive leap between folktales, history, fantasy, beliefs and reality can be disconcerting at times. However, there is so much happening throughout this album, there will be something for all types of folk metal fans to enjoy.